At the end of last year, a new initiative resulting from the Green Jobs-Green New York Act from last year was announced by Governor David A. Paterson: A NYSERDA program to provide homeowners with free or reduced-priced energy assessments and low-interest loans to finance energy-saving improvements.

A revolving loan fund will be developed for homeowners and small business owners who will be able to pay back loans from the savings on their energy bills.  The program will first focus on homeowners, then eventually include loans for small businesses, non-profits, and multifamily buildings.

The plan also aims to create more green jobs by increasing the need for energy audits and improvements, and includes funding for green job training.  The job training component will focus on new entrants to the workforce and displaced workers.

STATE RANKINGS
In light of this and other efforts in New York, the ACEEE has provided a nice visual to see how we stack up to the rest of the country: This fall the ACEEE released its annual State Energy Efficiency Scorecard report that ranks all 50 states and D.C. on how “energy efficient” they are.  New York ranked number 4 behind California, Massachusetts, and Oregon. 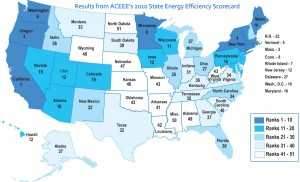