“In nature nothing exists alone.”

This quote of Rachel Carson’s perfectly sums up the lessons from her groundbreaking book Silent Spring. First published in three serialized excerpts in the New Yorker in June of 1962, the book was published in September of that year. The primary message, which science has since proven over and over, is that all living beings affect each other, and when you start harming one (even an insect) you end up harming the very beings (including humans) you were trying to help. 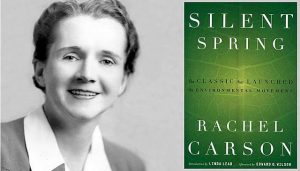 With this book, and the resulting new public awareness that nature was vulnerable to human intervention, especially uncurtailed, unverified technological changes, the public debate changed from whether pesticides were dangerous to which ones were dangerous, and the burden of proof shifted to the manufacturers. Responsibility was assumed by the government, who had previously not only failed to regulate but encouraged the use of pesticides.

Rising up to the challenge

Rachel Carson’s journey to writing the book was as fascinating as the book itself. By profession, she was first a marine biologist. As part of her work at the U.S. Fish and Wildlife Service, she had already authored other bestselling books. Carson had the uncanny ability to explain science to ordinary readers, believing that only when people understood nature would they act to save it. She’d received the National Book Award for her book The Sea Around Us.

Carson was initially hesitant to work on Silent Spring, which she referred to as “the poison book”. Writing it would involve taking on some of the largest and most powerful industrial forces in the world, a harrowing proposition for anyone, let alone a woman of her generation. Yet she did it, confiding to a friend, “There would be no peace for me if I kept silent.”  The book became an international best-seller.

Silent Spring conveys the voice of a woman who stood for truth even in the face of assaults from the chemical industry. But she also found as many advocates as enemies through her work, including President John F. Kennedy, who established a presidential committee to investigate pesticides as a result of Silent Spring. The book was also instrumental in the creation of the US Environmental Protection Agency and in eventually formally banning the pesticide DDT in the USA in 1972.

This book helped establish Carson’s place in history and in the hearts of environmentalists for all time, inspiring millions to never underestimate the power of a single person in bringing about positive change. The lessons of the book have a great deal to teach us about  the world we live in today. 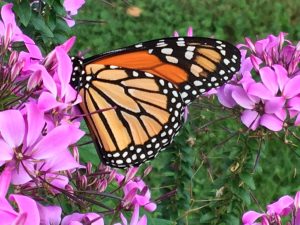 Pesticides destroy not just the particular pests but whole ecosystems

The disadvantage of chemical pesticides is that they don’t target selectively. When they are distributed into the environment, they get easily transmitted through water, soil and air, and are passed on in the food chain. Once unleashed, DDT was everywhere, even in people who were not directly exposed to it. When alfalfa farms used DDT for crop protection, the contaminated alfalfa was later fed to chickens, which laid eggs that still contained significant amounts of DDT. By eating the eggs, people ingested a dangerously high amount of the chemical.

To make matters worse, it turned out that DDT was far more harmful when sprayed in a mixture made with oil than one made with powder, as had been done during World War II to control malaria producing mosquitoes. That’s no small oversight, and it certainly drives home the need for all of us to inform ourselves about the effects of chemical pesticides. Thankfully, alternatives to harmful and disruptive chemical pest control offered in the book inspired more innovations over time: crop rotation, mass sterilization of pests, introduction of specific parasites and predators that help control the pest populations.

Shortly before her death in 1965, Carson remarked in a CBS documentary: “Man is a part of nature, and his war against nature is inevitably a war against himself. [We are] challenged as mankind has never been challenged before to prove our maturity and our mastery, not of nature, but of ourselves.” The remark is starkly real to this day.

As I read the book I felt an odd sense of confusion. Am I reading about the past or present? If this is the past then how much worse is our world right now? Is it worse or better? Our environment is put to test almost on a daily basis. Sometimes by the government in relaxing the environmental protection laws, sometimes by companies who continue selling harmful products, and sometimes by people like us who don’t think twice before double bagging groceries or getting yet another plastic coffee cup at our favorite java joint. All of these behaviors and inactions need to change for a better and more stable world.

The news in the last few months had stories about the chemical company Bayer (which now owns Monsanto) fighting legal battles regarding its Roundup herbicide. Recently Bayer agreed to pay $10 billion to settle tens of thousands of lawsuits that claim it to be a carcinogen. In addition, Bayer paid $400 million to farmers who claimed their crops were destroyed when dicamba, the active ingredient in Bayer’s XtendiMax herbicide, drifted onto their fields. This was after the U.S. Secretary of Agriculture Sonny Perdue urged the EPA to allow the continued use of already purchased dicamba products. Thankfully, due to environmental awareness and farmer education, the federal court has recognized the issue of drift as significant enough to ban the herbicide.

Yet the message Silent Spring carries continues to be challenged. The spread of covid-19 is a frightening reminder that the human species is capable of unleashing an enormous and destructive chain reaction across the planet. Even now, and especially now, our respect and care for the environment is being commanded to prevent future disasters. Now is the time for each government to bolster their environmental protection bodies and make sure regulations in water, air, and soil help create a better future, not deregulate for short term gains or industry pacification.

After reading Silent Spring, I concur what the NRDC Explainer said  in its 2015 blog post: “…books have at times been the most powerful influencer of social change in American life.” Rachel Carson’s Silent Spring exposed the hazards of the pesticide DDT and helped set the stage for the environmental movement. Perhaps, while waiting for this pandemic to subside, you can change your life by reading (or re-reading) this powerful book —or perhaps even change all lives by writing one.

Become an influencer of social change with a non-profit sustainability career.  Join GreenHomeNYC Careers online on September 8 and learn how. Details coming soon.