Conventional power plants produce energy by burning fossil fuel to run turbines that produce electricity, which is then distributed via an extensive transmission system into our homes and businesses.  Such systems are expensive to lay out, so utilities worldwide prefer to set these up in urban areas where the population density is higher.

For cities already struggling to reduce emissions from buildings and transportation, conventional power systems have exacerbated the problem. In more remote areas, the fossil fuel model has led to a power disparity, particularly in disadvantaged communities (DACs).

As reported in the 2012 paper, A Prepaid Architecture for Solar Electricity Delivery In Rural Areas, around 1.4 billion people lack access to reliable electricity, with 85% of them living in rural areas (Daniel Soto). Even if grid extensions are constructed, reading meters and collecting tariffs in remote locations pose significant logistical problems which further drive up operating and maintenance costs for customers.

Renewable Energy sources like solar and wind, have become strong contenders to dethrone conventional power plants. They produce no additional GHG emissions during their operation and can serve the disadvantaged communities by creating “microgrids” which can work independently of utility transmission.

The Achille’s heel of renewable energy has been that it  only produces power when the sun shines or the wind blows, in contrast to fossil fuel plants which create cheap, demand driven electricity. These fluctuations throughout the day beg the need for affordable long-term energy storage to make the electricity produced reliable.  However, manufacturing improvements and newer technologies over the past two decades, plus more advanced forecasting techniques, have made a stronger case for renewables.

Solar power has been expanding due to dramatic cost reductions in the last 10 years. According to an IEA Roadmap, IEA Roadmap, market prices of solar PV have been drastically reduced since 2009 – by factor of five for modules, and by a factor of almost three for systems.  Solar power in New York increased more than 1,000 percent from December 2011 to December 2017.

Despite greater affordability, though, the initial investment in an individual solar PV system remains high, given such fixed costs as permitting, inspection, interconnection and installation. An investment in rooftop PV takes a few years to recuperate. Many people, including those living in DACs, cannot afford this upfront cost. Plus, those who don’t own the buildings they live in—both in DACs and urban cities like NYC—may lack  the incentive to invest in solar. A study by the National Renewable Energy Laboratory found that only 22 to 27% of residential rooftop area is suitable for hosting an on-site photovoltaic system after adjusting for structural, shading, or ownership issues.

One way to bring down this cost of the system per customer is by  building larger scale projects that divide the fixed costs amongst customers, thus taking advantage of economies of scale. This simple concept has given rise to Community Solar, which is defined as a solar-electric system that, through a voluntary program, provides power and/or financial benefit to, or is owned by, multiple community members. Through this model, customers who cannot install panels on their rooftops can still gain access to solar energy in two ways: purchase plans and subscription models.

Purchase plans grant the customer ownership of part of the total solar installation through upfront payment or an alternate financing option. This model offers more return on investment over time, and the advantage of tax credits leads to a better value proposition in the long run. Subscription models are usually more popular amongst renters, as they offer a “pay as you go” plan with little to no upfront costs.

Community solar gives everyone, not just homeowners with ample space, the opportunity to access clean, reliable, and affordable electricity. It allows for an optimal siting, eliminating structural and shading issues. The communal aspect and involved ownership make for educated customers, and the development of these systems helps create local jobs within the community.

According to SEIA  (Solar Industry Association), there are 40 states with at least one community solar project on-line, with 2,056 cumulative megawatts installed through 2019. In February 2018, Governor Cuomo announced the completion of New York’s largest community solar project at the time. The 2.7 megawatt solar array, owned by Delaware River Solar, received $1.3 million of state investment, and includes almost 10,000 panels. Located in Callicoon in Sullivan County, it provides energy savings to residents throughout the Mid-Hudson Valley region. 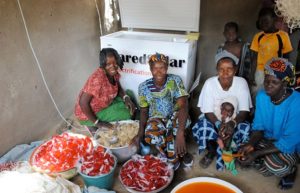 Globally, Community Solar is  a ray of hope for DACs who have historically lacked access to electricity. An especially inspiring community solar project, called  SharedSolar, was recently installed in parts of Africa. Its modular micro-grid solution provides electric infrastructure and service to a cluster of customers that are not immediately considered viable for grid connectivity. Using a pay-as-you-go model with smart metering, SharedSolar provides customers with reliable electricity, giving them a chance at economic prosperity.

While reducing emissions and costs to consumers, solutions like these also strengthen social infrastructure. They are more inclusive than the traditional centralized fossil power plants and allow for historically disadvantaged communities to access clean energy.  They also enable consumers to understand and interact with their energy production, nurturing a sense of collaboration and connection—crucial elements for the social and economic well-being of urban and rural communities alike.

Want to learn more about community solar? Join GreenHomeNYC Forums on August 19 for a panel on Community Solar, Storage and Beyond.