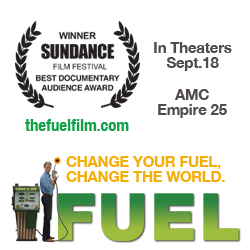 A new film is opening in New York September 18th that is well worth taking the time to check out. FUEL is a documentary film that addresses the challenges laid out in An Inconvenient Truth, and presents solutions to the climate crisis. An insightful and personal portrait of the consequences of America’s addiction to oil, Fuel points to the surprisingly hopeful future of sustainable energy. Winner of the Best Documentary award at the 2008 Sundance Film Festival, the film is a personal journey of one man – Josh Tickell – as he works to end America’s reliance on foreign oil. After seeing FUEL in festival screenings, over 90% of the audience left the film believing that America can realistically produce all of the energy it needs in the future.

More information and the trailer for the movie can be viewed here.


Posted by erik in Blog