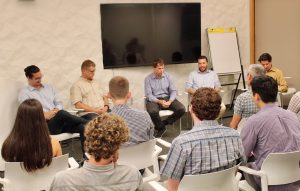 Jackman discussed the environmental dangers of the Hudson River watershed’s 1,500 dams inhibiting migratory fish. Jackman, a former NYC police officer, found his true calling later in life as an aquatic ecologist. He went from last in high school class to top of his class at Queens College taking five semesters of calculus because his over-achieving brothers only took four. Jackman’s career transition is representative of a GHNYC Career Transitions role model. He attributes his present status by being motivated to get good grades, his teaching fellowships, and passion about the environment. When he wasn’t getting jobs he kept building resume and his genuine passion for his field became noticeable to employers. Now with Riverkeepers he warns against dam’s multiplication of methane build-up. Historic societies claim longevity as an inherent benefit. Jackman counters that a lot of parts of our history are parts we don’t wish to memorialize. Dams can create bifurcated habitats where a lack of diversity among native populations causes species and population loss.

De Paula presently works on brownfields, which are former commercial and industrial plots with potential contamination, developing and mediating Phase I & II sites. One difficulty in his role is contending with historic fill, fifteen feet of soil and debris build-up. Of the interesting things found in the ground, De Paula mentioned large amounts of dry cleaning chemicals at a site too close to a health services facility. He highlighted the importance of internships, research opportunities, and teaming-up with a professor.

Auerback a specialist in waste water treatment with fourteen plants also arrived at his position through education. The Resource Recovery Center recovers energy, nutrients, and non-potable water. He explained the energy extraction of waste water from Anaerobic Digestion, the by-product Biogas (methane) displacing extraction of more natural gas as a fuel. As an undergraduate in microbiology he didn’t know what he wanted, other than a general interest in research, but knew he wanted to make a difference. His first job was obtained via a professor who opened up and granted access to his network rolodex, and Auerbach was willing and able to relocate.

Swenson, a City College alumnus now specializing in HVAC optimization. At CUNY had the opportunity to observe and meet one of his heros, Michio Kaku. Now also interested in the Internet of Things (IoT) side with sensor parameter functions. Swenson urged that if you don’t know wat you are looking for read the full job descriptions for skill sets you need to develop.

While three of our speakers had graduate level or higher degrees they mentioned other ways to work in environmental science and gain experience. They did warn of degree creep, where formal job requirements move from 2-year degree to 4-year degree and so forth. However, Swenson observed that when looking at resumes he is looking for someone that has an interesting knowledge set or something that he doesn’t know how to do. Jackman reminded us to join clubs and be active in organizations, recommending the Appalachian Mountain Club, The Nature Conservancy, or GreenHomeNYC.