For the June meeting, the GreenHomeNYC Green Careers group invited professionals with sustainability-focused experience in the government sector to present information regarding their backgrounds, their involvement in government, projects on which they’ve worked and advice they have for job seekers. The event was hosted by Skanska at their offices in the Empire State Building.   The first speaker was Alan Cohn, Director of Climate & Water Quality for the NYC Dept. of Environmental Protection (DEP). Having initially graduated with a degree in meteorology, Alan quickly realized his interest in environmental sustainability. While attending graduate school, he began interning for the EPA where he researched greenhouse gases and their polluting effects. His work contributed to what would later be published as the Endangerment Findings Report.   Upon completion of his internship and graduate school, Alan moved into his current position with the DEP where he coordinates water conservation and climate adaptation planning efforts for NYC. One particular initiative that Alan is helping bring to fruition is the city’s climate change resiliency plan. With $1.1 billion of vital infrastructure at risk, the city looks to save $2.5 billion in emergency response costs over the next 50 years by investing in strategic fortification now.   Ariella Rosenberg Maron, an Associate Principal at Happold Consulting was the next speaker to present. On her way to her current position at a private engineering company, Ariella had an early start at a financial firm followed by a career trajectory focused on government. 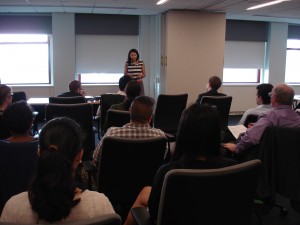 At her first job in the field of finance, she spent most of her time working in excel spreadsheets, accumulating knowledge and skills in the program. The next step in her career was graduate school in the Bronx where she wrote a thesis on sustainability in government offices. This thesis lead to her first position in a government office and opened the door for her to begin working on PlaNYC. Working with multiple branches of the government, she oversaw the initiation of PlaNYC, which is currently being executed. Through the connections she made while working in the government sector, Ariella learned of and applied to an opening with Happle Engineering. As a take away from her career experience, she notes: Skills gained from previous work experiences, regardless of their previous application, can and should be reused with future positions; learn a new skill every chance you get (i.e. Ariella learned Excel at her first job which has help in all future positions). To do well at your current job, you need to understand how government works.   Next, Christopher Mahase, the Director of Sustainability for the NYC Dept. of Housing Preservation and Development (HPD) addressed the group. Chris has a background in finance & accounting and started his career in real estate and contracting. 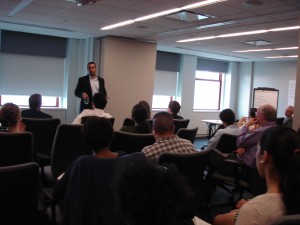 After returning to school and receiving a degree from Pratt University in Urban Sustainability Management, Chris began his work with HPD, which is responsible for low income housing in the New York City area. He has worn several hats during his tenure at HPD with his current job focusing on sustainability initiatives, including the implementation of Enterprise Green Communities criteria for affordable housing, and building professional relationships. To help achieve success, Chris recommended the following:

Understand the city, or just your part of it, and how it works. Learn how to get from point A to point B in your industry; networking is essential to achieving this. “Have connections and know your industry.”   The last speaker for the day was Cameron Bard, Special Assistant to the Chairman of Energy & Finance at the NYS Governor’s Office. Cameron got his start as an urban studies major at NYU which was followed by NYU law school. While at NYU, he held his first internship where he learned valuable lessons. The position taught him the importance of building a relationship with his boss and colleagues, but more importantly he learned the value of hard work. As opposed to simply completing the work one is given, Cameron recommended being tenacious and seeking out additional work.   With this in mind, Cameron applied to an internship at NYSERDA, which eventually lead to a full time job with the organization. He has since worked his way to his current job within the Governor’s Office where he supports the development and implementation of the strategic plan to scale up clean energy, enhance New York’s competitiveness in the sector, and make our energy systems more resilient and reliable. Based on his experience, Cameron had the following pieces of advice to share: Learn to speak the language of the industry – read articles relevant to the industry you work in and keep up to date with news regarding the big players. Use your connections to your advantage – request introductions and informational interviews with people you know and 2nd degree connections. Resume formula: I accomplished X relative to Y by doing Z. 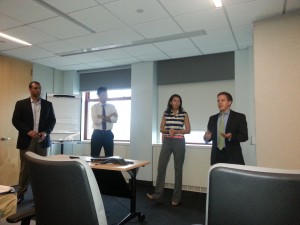 After the presentations, the floor was opened for a Q&A session.The end discussion focused on the topic of long-term sustainability. The consensus from the speakers was overwhelmingly in favor of a strong, growing industry, which is showing signs of lasting job security. For the GHNYC Green Careers attendees, there was a plethora of knowledge passed around and helpful experiences shared. Overall, everyone left with a better understanding of how to possibly improve his/her job hunt and professional career and perhaps a few new people to add to his/her network.   By Matt Gerson Edited by Katie Schwamb

The GHNYC Green Careers group provides informational resources and networking opportunities for individuals looking to break into the sustainability and energy-efficiency field. Our meetings occur on the first Tuesday of each month. Visitwww.greenhomenyc.org for updates and email katie@greenhomenyc.org with questions.

Interested in volunteering with GHNYC? We have Volunteer Orientation & Meet-ups on the last Tuesday of every month. For more information or to attend the next meeting, email our volunteer coordinator Tad Kroll: tad@greenhomenyc.org.