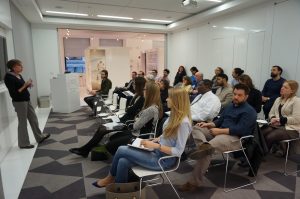 From teachers to program managers on various scales, the following green professionals were brought together by the GreenHomeNYC Green Careers group on May 10th to share their personal histories, day-to- day challenges and advice about that indefinable and ever-changing area between sustainability and academia. Their stories, as summarized below, reveal that their differences are as evident as their similarities.

This month’s recap features insight from Liliya Shames (NYC Department of Education’s Deputy Director of Operations), Christopher Sedita (Green Buildings Teacher and CTE Department Lead at The Urban Assembly School for Green Careers), Dianne Anderson (NYU’s Sustainable Resources Manager) and Antuan Cannon (CEO and Co-Founder at Envirolution One) about counting light bulbs, knowing your strengths, bureaucratic nonsense and how to overcome it, and the true source of renewable energy. 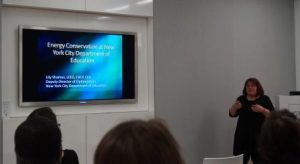 Since 2010, Liliya Shames has served as NYC Department of Education (DOE)’s Deputy Director of Operations (a “fancy way of saying Energy Manager”) for Manhattan, overseeing all 250 public school buildings on the island. But her entry into a long career in of energy efficiency was far from planned.

“I had no idea what [an Energy Auditor] was,” Liliya Shames said when the New York Urban Coalition Housing Group hired her as one in 1991. She’d just earned her mechanical engineering degree from the University of Virginia, but at the mercy of the early 1990s recession she was forced to broaden her job search. She discovered that she liked it, and soon moved on to a similar position with the Association for Energy Affordability. During her 17 years there, she learned a lot about energy conservation at a time when few people knew what the term meant.

When Mayor Bloomberg’s plan to reduce greenhouse gas (GHG) emissions from municipal buildings inspired the City’s largest agencies to hire their own energy managers, Liliya Shames was the first. Faced with no budget and given no direction, she was limited to low- and no-cost measures to reduce energy usage. She has a maintenance budget now, but that amount has been cut 25% since 2003, leaving a mere $30,000/year per school. Despite these circumstances, she’s proud to say that her borough has DOE’s 30% by 2017 emissions target and is on track towards the next one (35% by 2030). As of 2015, Manhattan public schools are free of No. 6 oil and retro-commissioning projects have been implemented in 30 buildings. 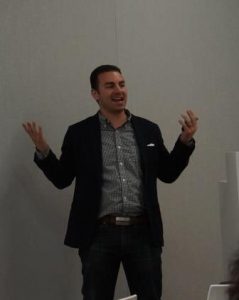 When describing his personal experience as a Green Buildings Teacher and CTE (Career & Technical Education) Department Lead at the Urban Assembly School for Green Careers, Christopher Sedita makes a strong case for a career in education. He designs and builds “all the time” (and in a less stressful environment), often learns from his own students, did not have to go through education school, and enjoys the perks of having a pension and free health insurance.

While pursuing his Bachelor’s in Architecture at NJIT, Sedita worked as an Architectural Associate at a two-man firm in Staten Island. He received valuable mentoring, and working at a small company allowed him to gain experience doing pretty much everything. After 5 years, unable to advance within the firm and feeling restless from so much sitting, he became a Field Superintendent at the esteemed FJ Sciame Construction Co. before starting his own construction company in the late 2000’s. However, he claims he

learned some his most valuable skills during his four years managing an art supply shop in Newark, NJ –how to be a bookkeeper, write a loan proposal, hire and fire people, etc.

Repelled by the stress of construction work, he eventually decided to pursue his M.S. in Sustainability at City College. While in school he worked at Sustainable South Bronx as a consultant, teaching green building through their worker re-entry program, which led him to his current job. 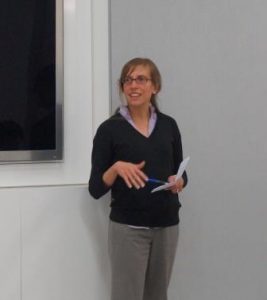 Dianne Anderson is a self-identified treehugger, and it was her love of nature that led to her position as New York University’s Sustainable Resources Manager. Despite having majored in environment studies, she was hired by engineering firm after graduating from San Jose University in 2002. “You can communicate,” her boss told her during her job interview. “Most of our engineers can’t.” Because she was hired for her communication skills, she attended client meetings and was able to learn key engineering terms and concepts on the job.

Still, she wanted to broaden her experiences, and in 2005 began working as a Resource Conservation Specialist for San Mateo County in California. She worked with the Planning Department to develop ordinances to improve recycling and energy efficiency and feels that it was a great opportunity to influence environmentalism in that community.

When Anderson decided to return to school, it was the job offer from NYU that brought her to the east coast. Her first task was to improve the University’s waste management practices, but was surprised to learn that the world of academia is VERY bureaucratic – even more so than local government. “Probably the hardest challenge I face is how to get everyone on board,” says Anderson, from the custodial staff to the business office to the players at the very top. However, she notes that it helps when the school makes public commitments for improvement. When NYU signed on to reduce their emissions 30% by 2017, it was Dianne Anderson’s job to figure out how. She looked at utility bills, counted light bulbs, hired consultants to develop a climate action plan and identified emissions reduction projects. Today, the University has achieved a 32% reduction from the 2006 base year, most of which is due to a new cogeneration plant on campus.

Advice: Passion is important. It’s a broad field so don’t be afraid to pursue a career in sustainability even if you don’t have the knowledge. 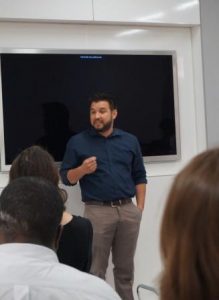 Antuan Cannon co-founded the non-profit Envirolution, Inc. while studying economics at Yale University, to impassion young people about sustainability. The organization has since morphed into the social enterprise Envirolution One and offers internships, job training and placement into the clean energy sector.

Cannon is passionate about helping people bridge the gap between their passions and their careers. “For me, the real source of renewable energy is not solar or wind but human potential.” He recognizes that so many workers are stuck in jobs they don’t care about, and works to facilitate transitions into positions where people feel energized and excited (and, consequently, productive!). He’s trained and placed between 400 and 500 people over the last 8 years. One thing about sustainability, he notes, is that the work is never done, so there’s always a job to do.

At the core of Cannon’s teaching philosophy is the way he talks about “jobs as ecosystems.” Even after studying all the information, it’s essential to understand all the dynamics at play in order to be productive. Envirolutions One provides job training to a wide range of job seekers: on Rikers Island, at the College of New Rochelle and at CUNY’s Building Performance Lab, to name a few.