On Tuesday, May 14, 2019, three professionals from the nonprofit sector gathered to discuss careers in sustainability. The panel included Danielle Bissett from the Billion Oyster Project, Gahl Sorkin Spanier from the Association for Energy Affordability (AEA) and Irene Nelson from the Natural Resource Defense Council (NRDC). 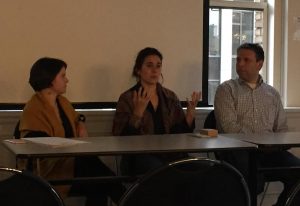 Energy Efficiency for All
Gahl Sorkin Spanier is Business and Market Analyst at the Association for Energy Affordability, an organization “dedicated to achieving energy efficiency in new and existing buildings in order to foster and maintain affordable and healthy housing and communities, especially those of low-income.” The AEA delivers energy efficiency services for low income housing, conducts energy audits, designs green buildings for both new and existing structures, offers trainings for residents and building operators, and provides certifications for building professionals in the energy sector.
Prior to Joining AEA, Gahl studied architecture at the Israel Institute of Technology and later received a Bachelors degree in architecture from Pratt Institute. After working for a number of years as an architect at various firms, he received an MBA from INSEAD. Following the completion of his business degree, Gahl focused his attention on green building and the intersection between sustainability and poverty. He believed that the choice to make and benefit from a positive impact on the environment should be for everyone, not just those with money.

Bringing Back New York’s Oysters
Historically, oysters were very prevalent in the New York Harbor and, before overharvesting and pollution, the waters around New York City were a biologically diverse habitat for marine life. Oysters are a keystone species and one adult oyster can filter up to 50 gallons of water per day.
Danielle Bissett is Senior Project Manager at the Billion Oyster Project, an organization whose goal is to reestablish oysters in New York Harbor through public education initiatives, hoping to establish one billion oysters by 2035. The current number stands at 28 million. Working with schools and bringing in volunteers allows the Billion Oyster Project to connect with the local community in establishing reefs and monitoring their progress, and allows community members to reconnect with the waterways.
Before joining the Billion Oyster Project, Danielle completed her undergraduate studies at Adelphi University, graduating with a degree in environmental studies and anthropology. Her passion for the environment led her to pursue a Masters of Science in environmental policy from Bard College, followed by three years in the New York City Parks Fellowship and Conservation Corps Program. Through the fellowship, Danielle learned about the ecological restoration projects within the Bronx watershed. After the fellowship lost funding, she started working at the Billion Oyster Project. 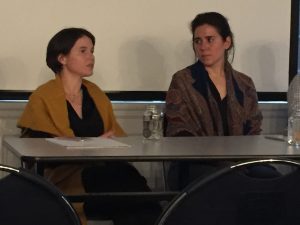 Bringing the Paris Agreement to New York
Irene Nelson is a City Strategist with NRDC, an organization that works to safeguard people, ecosystems, and the planet. As part of the American Cities Climate Challenge, a joint effort of NRDC and Bloomberg Philanthropies, 25 cities were chosen across the United States to implement the goals of the Paris climate agreement, and Irene works with New York City to help implement these changes. These initiatives are important as state level action can drastically affect cities and states across the country. The program aims to mitigate greenhouse gases by starting with block level leadership in cities.
Irene studied urban planning as an undergraduate and was interested in landscape architecture and horticulture. She worked in the regional government in Portland, Oregon and at the county level in Virginia. After spending a year farming, Irene realized that she wanted to go back to school for climate change. After completing her Masters, Irene was chosen as a Presidential Management Fellow and served two years in different roles within the US government. She then spent 14 years at the Environmental Protection Agency, working on carbon mitigation and adaptation techniques. She was appointed Climate Change Cooordinator under the Obama administration, and her passion for climate change finally brought her to the NRDC. 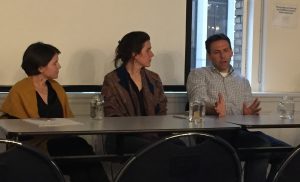 Career Advice: Follow Your Passion
The panelists gave some solid advice to those seeking careers in the nonprofit sector. They suggested reaching out to people currently working at organizations you would like to work for and requesting informational interviews over coffee or tea. Start building relationships through volunteering with the organization to get your foot in the door. Check out Charity Navigator for a profile on the organization you are interested in. Use LinkedIn to learn about the career paths of people who are successful in the field. The biggest piece of advice they all agreed on is: Follow your passion.
To help you learn more about career navigation in the nonprofit sustainability sector, the speakers recommended the following books:

Scrum: The Art of Doing Twice the Work in Half the Time by Jeff Sutherland and J.J Sutherland
Let the Mountains Talk, Let the Rivers Run: A Call to Those Who Would Save the Earth by David Brower and Steve Chapple
Whiplash: How to Survive Our Faster Future by Joi Ito and Jeff Howe