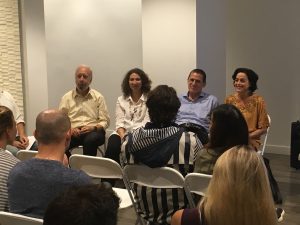 On August 13, 2019, Green Careers hosted a varied panel of professionals in academia to share their career journeys. While their paths each took a different direction, the three speakers had two things in common: their paths all had many twists and turns, and they all navigated their voyages with passion and perseverance as their compass.

Lisa Dale is a lecturer at The Earth Institute at Columbia University and has a PhD in Environmental Policy. Her research focuses on sub-Saharan Africa and the American Southwest. Her career includes a long list of accomplishments in academia and government policy, but like many in green and sustainability careers, it began with a love of the outdoors.

Lisa’s PhD research focused on how forest-dependent communities in Ethiopia help to preserve the forests they depend on. While teaching at the University of Denver, she eventually felt a frustration and asked herself why she was spending so much time talking about what others were doing in environmental policy and decided that she was going to get involved herself. This decision led Lisa to a position as Assistant Director for the Department of Natural Resources, where she remained for five years.

Eventually, Lisa’s academic calling began to tug at her again, this time leading her east to Yale. While there, she ran the Center for Environmental Law & Policy, which gave her additional experience in academic administration. After two years, she made the transition to her post at Columbia.

Over the course of her career, Lisa has felt a growing optimism about possibilities in interdisciplinary studies. The environmental policy field has developed a great deal since she first entered it, and there are now more programs available that enable people to blend skill sets to help address the wide array of environmental challenges we face today. While Lisa cautioned that it is “very difficult to get out of academia and very difficult to get back in,” she remained encouraging about the many opportunities to get involved at the community college level, a good place to get a foot in the door.

George took a more circuitous path to the position he is in now, and he uses the word “career” as a verb. Career, the noun, is the occupation we fill for a significant part of our life; career, the verb, connotes moving swiftly in an uncontrolled way, which is a more accurate way to describe how many of us eventually find our true calling.

George’s first career was in corporate law. He then worked his way into academic administrative positions, as well as becoming involved in writing and editing. In an effort to get up to speed in a new and growing area, he joined the Sustainability in the Urban Environment program at City College of New York—both as a Master’s student and an administrative assistant to the Founding Director of the program.

Although he originally had thought of the administrative position as temporary, as the program began to grow so did the needed administrative work. Within a couple of years, City College decided to create a full-time Program Manager position—and George assumed that role.

George reminded the group that at times, in order to make a career shift to something more interesting, you have to be willing to take a pay cut. He also noted that if you can find within an organization some tasks that need to be done but are not yet being done satisfactorily, some interesting new work possibilities may emerge.

Nadia Elrokhsy currently teaches at the Parsons School of Constructed Environments, while also being a principal architect at her own firm. She originally studied architecture and interior design, but soon developed a “desire to know how her field was impacting the world.” She discovered one way to learn this was to pursue higher education and began to look around. She found that at the time no colleges or universities in the United States were addressing her question, so she looked overseas and found a master’s program in Environmental Design at the University of Cambridge in the UK.

After graduating, Nadia returned to the US to begin her career as an architect. She was able to work and further her interest in how interior architecture relates to sustainability. Through this experience she was able to hone her understanding of how interior design affects the way people interact with their environment, and she discovered that with the right design you can influence inhabitants’ actions.

Eventually Nadia found that in order to truly pursue her interests, she would need the flexibility that teaching offered. She has since been able to focus her time on projects that truly interest her, making volunteering a possibility.

Richard Leigh is a Visiting Professor of Math and Science at Pratt Institute. His formal education is in physics, but it wasn’t until after a long career in utilities that he returned to that discipline, eventually branching out into building science. Richard’s graduation timed well with a demand in energy research which resulted from the oil embargo of 1973, setting him on a career in the energy sector.

Richard’s energy sector experience involved a heavy amount of energy analysis, putting his technical skills training to work. He worked on many different projects, including early wind studies in the 70’s and 80’s, and impact analyses of large scale solar. After his energy career, Richard moved to the nonprofit world, and eventually came to teaching.

Richard described the chaos of a career in a similar way to George. He compared it to working in the lumber industry in the 1800’s: It was like running on a lake full of logs. You had to run in place to keep the one you were on spinning, in order to make any progress. Based on what we learned from this panel’s speakers, that is probably an apt description of career development in our times.