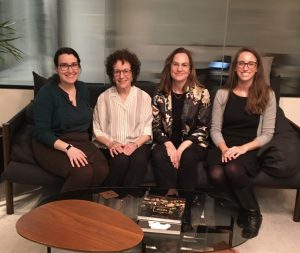 On Tuesday, January 14, GreenHomeNYC organized the first Green Careers panel of the year. This time, we got to hear from three people about what it’s like be employed in the field of Corporate Social Responsibility. Our panelists shared details about their journeys to their current positions, and about what to expect in the CSR world.

Ashley Hartman is a Corporate Sustainability Manager at Verisk Analytics, which does data analytics and risk management in insurance, finance, energy markets, and supply chains, with a big focus on data security and privacy. Ashley received a bachelor’s degree in International Development Studies and completed her master’s degree in 2014 with a focus on environmental management, then interned at a few non-profits and participated in an internship under President Barack Obama on the Council of Environmental Equality. In 2015, she moved to New York to work for a supply chain sustainability ratings agency, which was followed by another move to Memphis, Tennessee to work at FedEx on their corporate sustainability team. Eventually she found her way back to New York to her current position. She works on a team of two—herself and her boss—tackling everything from employee engagement to sustainability to philanthropy.

Julie Jack is a Senior Director at APCO Worldwide, an “independent, privately owned firm that does consultancy on a variety of issues, including CSR.” Julie got her undergrad degree in International Relations. She began her career path by helping to develop a sustainable forestry program on the national level. Getting frustrated with how slowly federal policy can move at times, she eventually went to business school and transitioned to the corporate and agency side.  Julie described her job as “issues advocacy,” and she often works with major environmental groups or foundations on energy poverty. Julie and her coworkers have to figure out “who’s having the conversations and where we need to show up in order to have [the client’s] point of view heard,” and then advocate for them. She mentioned the complexity of this process, including getting the media involved in a world where bad news tends to sell.

Judith Albert is an Adjunct Professor at the New School, where she teaches a course in Corporate Sustainability and Social Responsibility. “I actually prefer to call it Corporate Sustainability and Responsibility, and I am therefore redefining what CSR is.” Judith explained that CSR evolved from a small aspect of investor relations. Today, any significant corporation that practices CSR tackles sustainability, and the people who do CSR work are often embedded all over the company— “the logistics department, or the energy group, or the marketing group or whatever, so I think the whole topic needs to be redefined.”

Judith started at the Ford Foundation in Mexico after receiving a degree in Latin American Studies, and then practiced law here in New York before switching to banking. She found her way to JP Morgan and then moved to Bear Stearns. She left banking to work for the Natural Resources Defense Council as an Executive Director of a group called Environmental Entrepreneurs. She was a part of a group of investors, entrepreneurs and others from larger corporations who came together to advocate for investing in the clean economy. After four years, she started teaching at Baruch College. She’s been at the New School for the past five years, where she’s been teaching in a graduate program that focuses on sustainability. She is also on the board of an organization called Inside Climate News, “which is non-profit, non-partisan, online journalism on climate, energy, and the environment.”

During the Q&A session, the panelist offered some important career advice for CSR job seekers:

CSR is more than environmentalism. Some large corporations have CSR teams separated into specific focus areas, such as environmentalism, philanthropy, and employee engagement. Ashley referred to her position as kind of a jack-of-all trades, and she stressed the importance of diversifying.

There are many avenues to a career in CSR. Make sure you’re considering the entire playing field when looking for a job in sustainability management. Yes, there is the corporate side, but there are also agencies, rating firms, and more. Be prepared to be patient if looking for a corporate position because they’re highly competitive and few in number. There are also companies that haven’t yet adopted such initiatives, and that’s where you can create your own opportunity. In these places, you need to build a position by gathering quantifiable data about why the company could be improved through increased social responsibility efforts. Again, make yourself valuable and become recognized.

When it was time to wrap up for the evening, much had been shared about what it’s like to find and hold a job in a corporate or agency setting doing Corporate Social Responsibility work. Companies are changing the way they utilize CSR positions and what that actually means—and it’s often more fluid than most of us assume.


Posted by Emily Taubenblatt in Blog