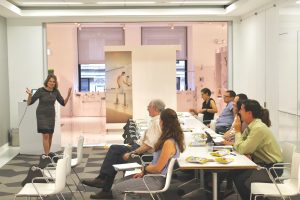 Whether you are an activist making an argument for climate policy or a prospective employee taking interviews in the green sector, persuading an audience requires nuance and skill. But how do you develop a powerful voice that will bridge the divide or get your foot in the door?

On August 14, Pamela Berns, leadership coach and global communications consultant, offered expert advice at the GreenHomeNYC Green Careers meetup, which was hosted at the GROHELIVE! Center and catered by Vegan Outreach.

Berns opened with a slide showing pictures of confident speakers. “Communication looks fun,” she said. “Everybody does it, no matter how old or young you are. Looks easy. But is it?”

Berns suggested that persuading listeners to change their point of view is actually a complex task. Three elements can make it difficult to accomplish: internal noise, frame of reference, and nonverbal codes.

Berns began with internal noise, which is similar to static on a telephone line. Rarely do people engage in pure listening, she said, and internal noise causes distractions. One audience member might remember that he forgot to add milk to the grocery list. Another might be so entrenched in her point of view that she can’t hear what the speaker is actually saying.

Berns identified the loudest internal noise in climate communication as confirmation bias. People who already have a strong opinion about a topic may unconsciously use a speaker’s evidence to support their existing opinions. This can result in a boomerang effect that reinforces the opposite message of the one that the speaker intended to communicate. Berns said that this effect is exacerbated when a speaker builds a case by gradually introducing evidence while delaying the main takeaways until the end of the presentation. The listener ends up forming his own conclusion from the speaker’s evidence, often confirming what he believed all along.

To avoid this pitfall, Berns suggests opening a presentation with a “grabber”, such as a startling statistic or interesting anecdote, and immediately following it with your desired outcome and main takeaways. If you use this technique, audience members will hear your evidence with your conclusion firmly planted in their minds. At the end of the talk, she recommends recapping the main takeaway points and adding a call to action. If the talk ends with a different format, such as a question and answer session, Berns recommends restating your main points and action call one more time after this final section.

“Your audience should leave the room thinking about what you want them to do rather than about the last question they heard discussed in Q&A,” Berns explained.

The second thing that can make persuasion difficult is frame of reference. This is the lens through which a person sees the world, and it is based on culture, profession, upbringing, geography, family, community, politics and a host of other things that make that person who she is. This personal lens makes stepping into someone else’s shoes no small task. To frame a discussion about a divisive topic like climate change in a way that resonates with your audience’s references, Berns suggested establishing trust and credibility by finding commonality. Berns said that the easiest way to accomplish this is by considering your listeners’ frames of reference and finding points of intersection. The will help avoid the ‘us versus them’ experience, so the listeners will feel less like they are abandoning their own identity groups if they change their views on climate change.

Finally, according to Berns, speaking involves not only what you say but also how you say it. That’s where nonverbal communication comes in. Nonverbal elements of communication include story structure, visual expression, and sound. As she turned the discussion to nonverbal cues, Berns explained that the use of these signals is one of the best ways to establish a positive interaction in an important situation, whether you are trying to change minds about climate change or make a good first impression at an interview.

“These are conscious actions you can take to create an unconscious response in your listener,” she said. “It’s the one thing you can control.” 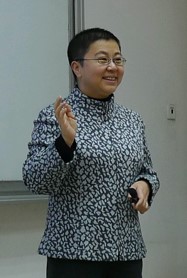 Deciding where to position yourself in a room is one of the key factors here. Facing your listener across a table can feel adversarial, while sitting at two adjacent corners creates a connection. Seating groups at opposite sides of a rectangular table can create silos that could have been avoided by mixing groups at a round table. Standing while presenting puts the speaker in firm control. Sitting invites more interaction.

When discussing body language, Berns introduced a model to differentiate stances of power from those of relationship building. Borrowing an image from calligraphy, Berns explained that pen strokes are angular and linear while brush strokes are curved and flowing. She put the traditional power stance, in which you stand tall and straight with arms at your sides, into the ‘pen’ category, describing it as a way to project authority. Leaning toward one’s listeners with a curved posture and an open hand is a ‘brush’ stance, which creates connection.

Movements have similar effects, and the manner in which you enter a room makes a first and lasting impression. When beginning an interview, for example, it is important to project an image of confidence using ‘pen’ movements, striding quickly and purposefully, making eye contact with the interviewer, and offering a firm handshake. The size and shape of your hand gestures can help to emphasize parts of your story and establish an overall tone for your interaction. Small gestures tend to appear more reserved, while larger, more effusive gestures can demonstrate creativity or excitement.

Berns gave participants tips on how to successfully navigate the crucial first moments of an interview, and they were invited to practice their skills in real time, getting feedback from both Berns and other participants.

“You rehearse your answers to interview questions,” Berns reminded everyone. “Practice the gestures that go with those answers.”

Participant Warren Berger, who volunteers with several environmental groups, found the advice helpful. “Your body language is as important as what you actually say,” he agreed.