For those of us who care about the planet but don’t have a single-family, detached house to invest in, it’s a good deal. Solar panels are installed in a convenient location in a community, and residents of the area can purchase energy by subscribing to the project. The solar power is delivered directly to the local grid. 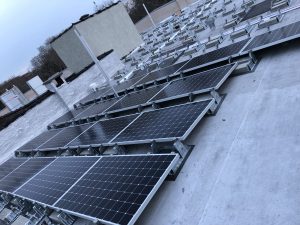 Going green without all of the strings

However, some community solar projects come with a drawback. A New York City renter may be unwilling to take on an energy lease that lasts longer than his or her rental contract. While not all community solar developers require long contract periods, many are financed by banks that require some kind of assurance that they can recoup their investment and earn a profit. This can take the form of multiyear contracts, credit checks or cancellation fees, depending on the project.

Enter UrbnDER, a new local solar developer. UrbanDER plans to make it easier for New Yorkers to sign up for community solar by offering options with shorter contract periods and no cancellation fees. This can be especially impactful for low-income and moderate-income renters who want to support clean energy.

Making the finances pencil out

Financial models for community solar can be complex, and UrbnDER provides an interesting look at how one works.

“The ability to take a vision, test it out in a market, talk to customers and then make it happen is super rewarding,” Russell Wilcox, CEO and co-founder of UrbnDER, said about his new community solar project development venture. “Having our own financing has been a big differentiator.”

Wilcox, who previously designed and installed solar systems with Bright Power, is using third-party finance to provide the upfront capital for investment in community solar projects in the city. The project financer agrees to take a slightly bigger risk on the willingness of solar subscribers to stick around for the duration of the project in return for federal tax credits, a share in the revenue from the solar energy and a one-time New York State Energy Research and Development Authority (NYSERDA) grant that can be collected when the project is connected to the grid.

Offering a third-party finance option benefits building owners who want to host UrbnDER projects. While the financer offers the upfront investment capital, the building owner receives a roof lease for the solar installation. The lease model ensures that building owners see steady income from the project rather than having to accept the risk of whether the project will be fully subscribed at all times. Building owners also receive city property tax abatements and potential roof improvements bundled into the project financing. Although their tenants are given first priority to subscribe to the installation, owners are under no obligation to purchase any power generated by the installation, and anyone in the surrounding community can sign up as a subscriber.

Residential subscribers get a reduction in their energy bills – the industry standard is 10 percent. They are also helping to generate distributed renewable energy right in the heart of New York City, which has a huge electricity demand. When more renewable energy is produced in the city, less fossil fuel energy has to be imported into the city over congested power lines.

As for UrbnDER, it makes its revenue from handling project permitting, installation and ongoing maintenance. 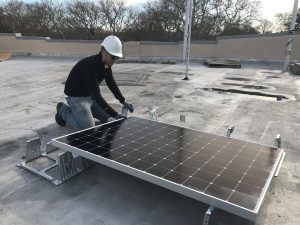 However, it is important to note that unlike residents purchasing renewable energy credits from energy service companies like Clean Choice Energy or Green Mountain Energy, which sell the renewable attributes of clean energy to residents who want to promote zero-carbon electricity, community solar subscribers cannot say that they are using clean energy. While their money is undoubtedly resulting in new clean energy projects being built in New York City, the official clean energy attributes from the community solar project go to their utility, according to a recent article from Greentech Media.

In reality, given the urgency of hitting the state’s upcoming renewable energy milestones, the likelihood is that urban community solar installations will help utilities meet their renewable goals by putting more solar on the grid. And siting solar projects in an urban area where zero-carbon energy is tough to produce and in high demand is a huge step toward making a zero-carbon grid a functional reality. Allowing the utility company to take ownership of the renewable energy credits enables it to reimburse solar power subscribers at higher rates, improving the economics of community solar and encouraging more installations, according to Greentech Media.

The more panels, the better

Ilona Wilcox, co-founder of UrbnDER, explained that part of the advantage offered by community solar installations is that they create a business case for covering the entire roof space of large multifamily buildings, warehouses and parking garages with solar panels. Many of these facilities typically would not use enough electricity to take advantage of all of the roof space they have to offer. However, the community solar model exports the power produced directly to the electric grid and can offer subscriptions to any resident in the same utility ‘load zone’. This makes utilizing all of the roof space available a practical business move.

“It was an interesting challenge: How do we put as much solar on these buildings as possible?” Russell said.

To streamline projects, UrbnDER partnered with a local real estate owner to identify 60 to 80 buildings with shared characteristics – moderate-income to low-income multifamily buildings built between 1930 and 1950. Then, based on preliminary solar designs created by Wilcox, they chose the buildings that would provide the best return on the investment. UrbnDER completed its first project recently at a Brooklyn multifamily building. The installation and interconnection went smoothly, and UrbnDER is now able to say that it is one of the first community solar development companies to have a foothold in the NYC metro area.

“We’re confident that solar is in a good place,” Russell said. “And we’re super excited about the potential in New York City.”

A Day in the Life of a Solar Installer 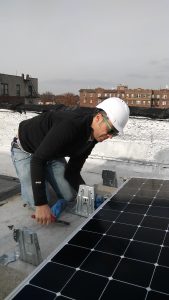 So, what is it like to build a community solar installation? Thanks to UrbnDER, several graduates of the NYU Clean Start program (including this writer) were able to join the build for a day program and experience the process firsthand. We gathered ahead of time to conduct safety sessions and receive a briefing on how we could assist. Having learned about the basics of racking and wiring connections, we spent a chilly winter day observing construction and helping out with some light tasks under the supervision of Russell and his team.

7 a.m. We arrived at the site, wearing layers of clothing to protect us from the wind and January temperatures. Russell showed us how to navigate from basement to roof. In this case, we were working in a walk-up building, which involved climbing five floors.

8 a.m. In the basement, we were put to work cutting through sheets of rubber with utility knives to create nonskid mats. The mats would be placed underneath the racking and panels, since the installation would be held in place by concrete blocks rather than being bolted to the roof. Since it was hard work cutting through the rubber, I made myself useful repairing a broken utility knife.

10 a.m. The piles of mats had grown quite high. Several of us started carrying them to the roof. While most items were lifted using a crane the day before, it was our job to transport smaller items by carting them up five flights of stairs.

11 a.m. We were still lugging mats, although with more and more frequent water breaks. Whew!

12 p.m. Everyone took a break for lunch. I tried hot sauce on roti for the first time. It turned out to be just the thing to warm myself up for the afternoon shift.

2 p.m. Back on the job. Under Russell’s direction, we mocked up a two panel unit, complete with racking and concrete blocks. Then we measured it to check earlier estimates of dimensions.

3 p.m. People (much stronger than me) began carrying racking and solar panels to different locations on the roof to get ready for the next phase of the installation. I did a bit of light clean up and then photographed their efforts.

4 p.m. As the sun set and the wind kicked into high gear, it was time to make the site secure and knock off work. The installation was one day closer to completion!

By evening, I was forced to admit that physical labor is very physical. I enjoyed my day on the site, but I was glad to go back to my office job! My hat is off to workers who endure the elements full time to make projects like these a reality.