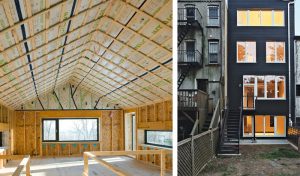 We are all materialists. Whether we are choosing or using clothing or food containers, building blocks or paving, at every moment a wide range of materials are an integral part of our lives. Technology has allowed creation of sophisticated materials with specific characteristics, with improvements usually driven by a desire for practicality and lower costs. However, both synthetic and traditional materials have impacts on the environment and on human health that we need to be aware of and understand. These impacts can manifest at different stages of a product’s life cycle, either during raw material sourcing, the manufacturing stage, its use, or at the end of its life. We provide examples of each below, focusing on the built environment.

Wood is used extensively in construction as well as in furniture. It’s an excellent insulator and has many virtues in construction. The production of wooden components can be much less energy-intensive than components made of other materials such as steel. However, unless lumber is sustainably sourced, timber harvesting contributes to deforestation and land damage.

Forests are vital for the planet and for our survival. They provide food and shelter for animals, plants, organisms, and indigenous communities. In addition, according to the World Wildlife Foundation, “they have a big influence on rainfall patterns, water and soil quality and flood prevention too.” And let’s not forget that trees are important carbon sinks that remove carbon dioxide from the air to produce the oxygen that we breathe! Forest reduction and damage due to non-sustainable timber harvest contributes around 10% of greenhouse gas increases. Organizations such as the Forest Stewardship Council (FSC) and the American Forest Foundation certify lumber that comes from forests that are managed sustainably.

Concrete is pervasive especially in big cities like New York City. It’s the most widely used man-made material and surprisingly, the second most consumed substance on the planet after water. Concrete is made from Portland cement and stone aggregate, and unfortunately, the production of the former generates substantial quantities of carbon dioxide, a potent greenhouse gas. The manufacture of Portland cement accounts for about 8% of global carbon emissions. If cement was a country, it would be the third largest emitter of CO2 (behind China and the US).

Most of the carbon dioxide created by cement manufacturing comes when the raw ingredients, ground limestone and clay are heated at around 2,640°F in a rotating kiln.  Producing a ton of cement generates a ton of released CO2. 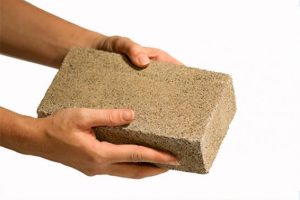 The Use Stage – Toxins in the Building Envelope

Materials used in the building envelope for insulation, fire-resistance, and adhesion, as well as paints and finishes, are not static; they react with other substances through  volatilization, abrasion, leaching, and oxidation, releasingchemicals that may present toxicity concerns.

Volatile organic compounds (VOCs) and semi-volatile organic compounds (SVOCs) are chemicals with relatively high vapor pressure that can be released into the air in significant amounts through “outgassing” and may remain long after application of a product that contains them, sometimes for many years. Some of the more common VOCs include formaldehyde, bisphenol A (BPA), and halogenated flame retardants (HFRs).

Formaldehyde, a known human carcinogen, is used in engineered wood, such as plywood and fiberboards, and in insulation materials, and is regulated under the Toxic Substances Control Act. BPA, an endocrine disruptor, is present in many costings, adhesives, and fillers. Its effects on human health are still unclear, but animal studies have shown that it can cause brain and reproductive disorders, among other diseases and for this reason the EPA has expressed concern about it. Halogenated Fire Retardants (HFRs) contain chlorine or bromine and tend to bioaccumulate, as they are stored in fat and become more concentrated as they move up the food chain. These chemicals are associated with adverse reproductive, developmental, and neurological health effects.

Antimicrobial agents are a newer entry to the list of most toxic building materials. One or a combination of antimicrobials is often contained in paints and interior finishes, despite a lack of evidence of their benefits. The FDA and CDC have already expressed concerns about antimicrobials (triclosan, for example, can no longer be included in personal care products), but the EPA hasn’t yet made similar recommendations. There is a rising concern that widespread use of antimicrobials is provoking microbial resistance.

Plastic offers builders many favorable properties: durability, versatility, light weight, and affordable cost. According to the Alliance for Sustainable Building Products (ASBP), the construction industry is the second largest user of plastics, particularly in piping and conduits, and generates 20% of global plastic waste.

Single-use plastics in the waste stream are particularly problematic to handle. Despite efforts to improve recycling, only 8.4% of plastic is recycled in the US (source: EPA 2017) and the rest ends up in landfills, if we are fortunate, and in the ocean gyres, on beaches, and city streets if we are not. It does not really decompose, but breaks into smaller and smaller particles, although it can also contribute to the generation of methane. When improperly discarded it poses a danger to wildlife through entanglement or ingestion of microplastics. Even in landfills, plastic can contaminate soil and groundwater.

Federal regulations such as the Toxic Substances Control Act regulate the use of toxic substances to some degree. Certifications and labels such as Green Seal® and the Health Product Declaration® Open Standard have developed standards and disclosure tools for reporting product content and associated hazards. LEED (Leadership in Energy and Environmental Design) certification by the U.S. Green Building Council (https://www.usgbc.org/leed), is another step towards improving sustainability in buildings.

However, many risks remain. Both individuals and certainly companies should consider the entire materials life cycle in product conception and design, so that risks can be minimized or eliminated, from the sourcing of the raw materials to the end of life.

Want to learn about what goes into materials and how they can affect the environment, indoor air quality and your health? Join us on online for our GreenHomeNYC forum on September 16 at 6:30pm.