It’s the time of year in New York City when young people in caps and gowns seem to be everywhere – what better time to celebrate the sustainability achievements in our City’s schools. The fourth NYC Department of Education Sustainability Initiative annual report boasts 81 pages of accomplishments in the greening of infrastructure, curriculum design, teacher training, and extracurricular programs in scores of K-12 schools . DOE Director of Sustainability, Dr. Sharon Jaye, is proud of the myriad 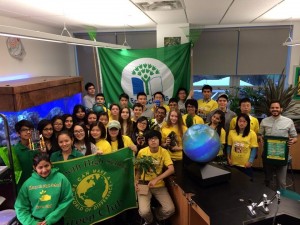 initiatives in waste management, water consumption, and energy use, but sees student engagement as the heart of the effort. In this two part series, we will look at two new public high schools where students engage not only on a school-wide basis but also in the community. Both aim to turn out graduates with excellent critical thinking and communication skills, but each comes at sustainability education from a very different angle.

Founded in 2009, The Urban Assembly School for Green Careers, a Career and Technical Education (CTE) high school on the Upper West Side, has been chosen as a demonstration school for innovation in vocational and technical education.  Maspeth High School, founded in Queens in 2011, has based its model on student clubs.  In this issue, we will focus on Maspeth High.

The Maspeth High School vision is “to have our students become leaders in all fields of personal endeavors through academia, and to be physically, emotionally and intellectually healthy with determination and compassion.”  There is probably no better example of the embodiment of that vision than the Maspeth High School Green Club. The club was founded at the same time the school itself began operating in September 2011. Aaron Bell, the faculty advisor responsible for the club’s inception, gives all the credit for its birth to both the vision of the school’s Principal, Khurshid Abdul Mutakabbir, and the tenacity of five freshman who not only established the club but “created its identity” and became the “heart and soul of the project.”  With just these five girls on board, the team hit the ground running almost immediately, when Council Member Elizabeth Crowley reached out to Maspeth for help in a graffiti removal project. “That very afternoon, we went out into the community and started working,” says Bell.

That spirit has deepened and grown in the four years since the club’s beginnings.  A three-time winner of the Department of Sanitation’s Golden Apple Award, and 2014 recipient of the National Wildlife Federation’s Green Flag award, the club has expanded to include 50 students. “Recruitment is easy,” says Bell. “Students want to be part of this club.”  They look forward to active engagement in real world projects in which they can make a tangible difference. New projects ranging from growing hydroponic produce in an indoor garden, to launching composting programs, to conducting facility-wide recycling, energy and water use audits, are initiated each year; but what is most remarkable is the sustainability of the club’s ongoing efforts.  “I just sit back and admire the work of the students'” says Bell, who refers to them as “leaders for New York” whose drive and intelligence keep the momentum going. Next year Bell hopes the club will see the addition of a permanent green house and a solar roof.

Bell believes that the club is definitely preparing the students for environmental leadership. “They’re not just involved in 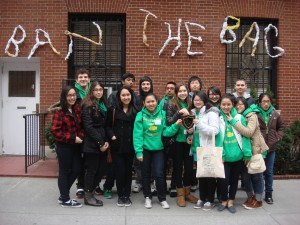 advocacy,” he says. “Their actual engagement in city planning shows how powerful student action can be.”  He recalls the 2014 Student Advocacy Day, when former club president Jia Chen stood at the podium in front of City Hall making her case to reporters and news cameras.  Bilingual in English and Mandarin, she delivered her message with poise and confidence in both languages. The five founders will graduate in 2015, which is bittersweet for Bell.  Lulu Zhou, a prize winner for her work on the STOP (Students Take on Plastic) Bags project, will be among the graduates. “Action inspires a future,” says Bell, as he shares Lulu’s plans to study the environment at Middlebury College. He looks forward to staying in touch with her and following her career, which he is certain will be a success.

When asked what other schools can learn from the Maspeth High School Green Club as the Department of Education continues to scale up its sustainability efforts, he says success is built on vision, attention to detail, a supportive administration, and strong commitment of staff and students.  He believes the Mayor’s OneNYC plan, with its four Visions, has the potential to galvanize more exciting activity.  He points to the unilateral replacement of styrene foam school lunch trays with compostable trays through the Cafeteria Culture program as a prime example of positive and concrete change, and hopes that new accountability will help turn vision into real sustainable action.

The DOE has plenty of other arrows in their quiver as they move forward into the year of OneNYC.  For one, with the help of Columbia University Teachers College, they are currently pooling all the data for the 2014-15 school year, and will be making much of it available to the public in a user-friendly ten-page web-based document. This is good news to Michelle Andry,  Partnerhship Coordinator for the Urban Assembly School for Green Careers, who believes more people should be aware of the Department’s progress.  And her school certainly has lots of progress to report.  Stay tuned to our September issue for the details of that back-to-school story.