As though sending a portentous message, the movie “Paris Can Wait” was playing at the Paris theater just one block from Trump Tower in New York City, when Donald Trump announced the U.S. pullout from the Paris Climate accord. But commitments to climate change action and strategy march on: the initial disappointment with the White House decision quickly morphed into strengthened resolve and galvanized coalition building within and across public and private sectors, U.S. localities, and around the world.

While organizations like NRDC have stepped up their legal and policy battle, Goldman Sachs CEO Lloyd Blankfein’s first tweet ever was to tell the administration that the president’s “decision is a setback for the environment and for the U.S.’s leadership position in the world.”

California Governor Jerry Brown and Chinese President Xi Jinping pledged to expand trade between California and China with an emphasis on green technologies, and 313 U.S. mayors joined together in a commitment to “adopt, honor and uphold” the goals and principles of the Paris agreement. 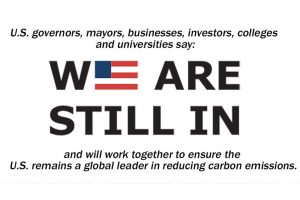 And that’s just the tip of the proverbial iceberg. Despite federal policy, the sustainability and climate change action movements are very much alive, kicking, and in full throttle. The list promises to keep growing, and we invite you to add to it (see the the end of this article to learn how to contribute your stories). Here are just a few more of the most recent reports we’ve come across.

Standing together for climate action

Bloomberg Philanthropies is leading the coalition-building charge with “We Are Still In”, which began with Michael Bloomberg’s letter to the United Nations Secretary General and the Executive Secretary of the UN Framework Convention on Climate Change, with an attached statement from from 125 cities, 9 states, 902 businesses and investors, and 183 colleges and universities.  The purpose is to “demonstrate Americans’ collective commitment to supporting climate action to meet the nationally determined contribution made by the United States under that accord.” The Bloomberg website includes the full letter and statement as well as links for getting involved.

As reported in the online newsletter  Curbed, “According to Daniel Firger of Bloomberg Philanthropies,…’the plan isn’t to hold participants to any binding climate goals,’ but rather ‘to create a mechanism to keep track of the country’s efforts to lower carbon emissions,’ and to ‘aggregate the climate impact of these subnational actors in the U.S. and share them with the world.’ ”

Another collaborative, RE 100, launched in New York City during Climate Week in 2014, is a global initiative of influential businesses that “shares the compelling business case for renewables and showcases business action, while working with others to address barriers and develop transparent reporting mechanisms.” Companies joining RE100 are encouraged to set a public goal to procure 100% of their electricity from renewable sources of energy by a specified year. Since it’s inception, companies from all over the world have joined the initiative. 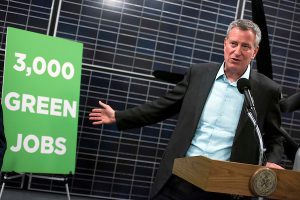 Likewise, as we recently reported on the GreenHomeNYC blog, this past Earth Day, NYC Mayor Bill de Blasio had already unveiled a city initiative called the NYC Green Jobs Corps .  In partnership with the Building Construction Trade Council, the program will support the training of 3,000 workers who will be instrumental in making this a cleaner and better city.

Hawaii makes it a law

The New York Times reported on June 7 that Hawaii had just become the first state to pass a law committing to the goals and limits of the Paris accord. Hawaii governor David Y. Ige signed two bills, one explicitly committing greenhouse gas emissions in accordance with the Paris goals, and the other establishing a task force to help the state improve soil health and remove carbon from the atmosphere.

US mayors ensure that the science is still there

Removing the scientific research data base from the EPA website won’t make it go away. To ensure that readers can still access the information, in May, Chicago became the first city to host the deleted pages from the site. Since then nine other mayors have followed Rahm Emanuel’s footsteps by creating their city’s own “Climate Change is Real” website. You can link to each city’s website here.

As reported in The Economist on June 10, “Some environmentalists now see businesses as allies, rather than adversaries, in the fight against global warming, and believe they could become strong forces behind the worldwide spread of clean energy. ‘There used to be rhetoric and little action,’ says Marty Spitzer, head of climate and renewable-energy policy in America for the World Wildlife Fund (WWF), a charity. ‘Now I see fundamental changes.’ ”

On June 12, Goldman Sachs announced the signing of a long-term Power Purchase Agreement (PPA) with a subsidiary of NextEra Energy Resources, LLC, which will add new renewable energy capacity to the electricity grid. “The agreement will enable the investment and development of a new 68 megawatt wind project in Pennsylvania and is anticipated to facilitate up to 150 construction jobs and result in the reduction of more than 200,000 tons of greenhouse gas emissions per annum once operational.”

According to The Economist, Goldman is not the first to embark on the PPA train. While many companies took advantage of a federal tax credit that will soon expire, “Big business has by now spurred the worldwide development of a cumulative 20 gigawatts (GW) of wind and solar farms. That is four GW more than the entire onshore and offshore wind capacity of Britain.”

The Wall Street Journal wrote on June 2 that “General Electric Co. has [already] spent billions to make technologies that reduce energy consumption a core part of its business. ‘Disappointed with today’s decision on the Paris Agreement,’ GE Chief Executive Jeffrey Immelt said via Twitter… ‘Climate change is real. Industry must now lead and not depend on government.’ ” 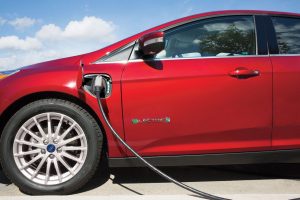 The Journal also reported that “Ford Motor Co. said it was still committed to technology investments to make its vehicles emit less carbon dioxide, including shorter-term moves to improve the efficiency of the internal combustion engine, and longer-term plans to develop affordable fuel cells and enhanced batteries to create electric vehicles that can travel longer.”

Regardless of the continuing diminution of climate and environmental oversight in the United States, companies that do business around the world remain subject to and committed to the laws of other nations. At a Better Business Bureau forum on corporate responsibility held in New York City on June 6, Jennifer Ryan Crozier, Vice President, IBM Corporate Citizenship, said that not only does her multinational company have to comply with “the regulations in all the countries we do business in,” but that it aims to exceed these requirements. Timothy J. McClimon, Senior Vice President, Corporate Social Responsibility at American Express echoed these sentiments, saying that the mission of his organization is to “meet or exceed the regulatory requirements.”

Colleges and Universities continue to to add sustainability education to their curricula, engage in sustainable operations on their campuses, foster and disseminate scientific knowledge, and set important examples through divestiture in their financial portfolios.

The Association for the Advancement of Sustainability in Higher Education (AASHE) includes 1,527 resources on a list of schools offering sustainability education ranging from full graduate programs to courses, such as chemistry, that incorporate a green or socially responsible component in their syllabuses. On the divestment front, New York’s Syracuse University and the New School are among the many schools around the world who have fully divested, and on the long list list of coal divestures are such notables as Columbia University and Stanford. Stanford also ranks second on AASHE’s Best Green Colleges list, which helps schools measure their green commitments through its STARS evaluation program.

And, in addition to signing up with We Are Still In, Columbia joined other universities  that reaffirmed their commitment

to the 2015 American Campuses Act on Climate Change. Notably, a joint statement issued by 12 universities points to scientific evidence: “The scientific consensus is clear that the climate is changing largely due to human activity, that the consequences of climate change are accelerating, and that the imperative of a low carbon future is increasingly urgent.  As institutions of higher education, we remain committed to a broad-based global agreement on climate change and will do our part to ensure the United States can meet its contribution.”

SHARE YOUR COMMITMENTS AND HELP US SPREAD THE WORD

What is your company, organization, school, state, or city doing to keep the climate agenda alive? What kinds of coalition building are you seeing in your community? Send these, along with links to additional information, to [email protected]. Please be sure to include contact information, citations and photos/image credits.