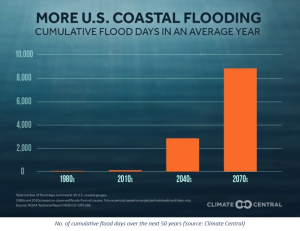 Cities all over the world are experiencing drastic changes in average temperatures and an increase in extreme weather events, such as more frequent and stronger storms. According to the New York State Department of Environmental Conservation, by 2050, the average temperature in NY is expected to increase by 5°F; the number of annual heat waves are expected to triple to about seven a year; and the annual precipitation is expected to increase between 4% and 13% from what it is today. With climate change a stark reality now, it is imperative to address the vulnerability of cities to the consequences of imminent climate disasters. A good resiliency plan would anticipate future disasters, absorb shocks if calamities occur, and enable recovery from climate stresses.

For New York city, the profound wake-up call for resiliency came with the devastating Hurricane Sandy in 2012. Because of the extensive damage caused by the storm, NY vowed to emerge as a stronger and more resilient city. 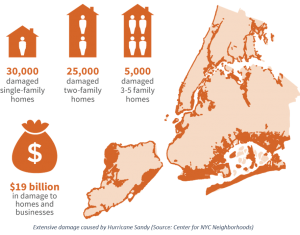 New York City was the first to join the 100 Resilient Cities (100RC) global network pioneered by the Rockefeller Foundation. Founded in 2013, this organization helps member cities receive financial and logistical support to hire a Chief Resilience Officer (CRO) to lead resilience efforts. Five years ago, the position of CRO did not exist. Today, at least 86 CROs around the world dedicate their time towards making their cities resilient. 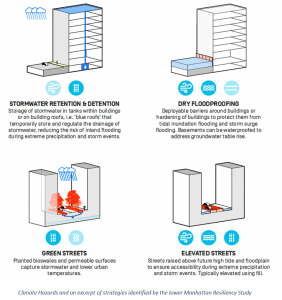 In the most recent development, in March 2019, Mayor de Blasio announced the Lower Manhattan Coastal Resiliency (LMCR) study that brought up a possibility of expanding Manhattan’s southern shoreline up to 500 feet into the East River to build new flooding prevention measures.

The study also presented an adaptation toolkit with measures organized by scale of implementation ranging from buildings to the coastal edge. Examples are wet floodproofing, stormwater, increased tree canopy at the street level and wave break islands and storm surge gates at coastal edges.

Several organizations and professionals in the city also contributed ideas and technical proposals for resilience. In 2014, NYCEDC launched the RISE program, a competition to identify innovative resiliency technologies that are targeted towards small businesses in the city. Eleven technologies were selected among 200 applicants for funding to implement their projects.

In the energy resilience category, a winning idea was Bright Power’s design of a resilient power hub that acts an on-site energy generation solution integrating solar photovoltaic, energy storage and co-generation technologies to reduce the energy costs and provide back-up power to critical building loads during a disaster. In the building technology category, one winner was FloodPanel LLC’s dry floodproofing panels that add a layer of protection to keep flood waters from entering a building. In the telecom technology category, a winning idea was GoTenna’s a portable communications device that pairs wirelessly with a smartphone and works without a cell signal or Wi-Fi connection, ensuring peer-to-peer emergency communication capability even if cell connections fail.

Overall, three approaches emerged in NYC to protect the city from imminent calamities. Coastal protection plans were developed to strengthen the first line of defense using structures such as berms, breakwaters, wetlands, and flood walls along the coastline. Second, the city adopted FEMA’s Preliminary FIRMs (Flood Insurance Rate Maps) into the building code. These maps identify areas that are at risk of flooding and assign flood zones based on the level of risk. Building-level resiliency recommendations were developed for flood-prone areas. Lastly, infrastructure hardening plans were established to protect critical systems such as power, communications and transportation from flooding.

Among major resiliency projects that are in the works in NYC is the Big U. A perimeter protection plan for lower Manhattan by BIG (Bjarke Ingels Group), this proposed system intends to protect against floods while fostering social interaction. The proposal divides the entire waterfront into three compartments that are designed independently as flood-protection zones. 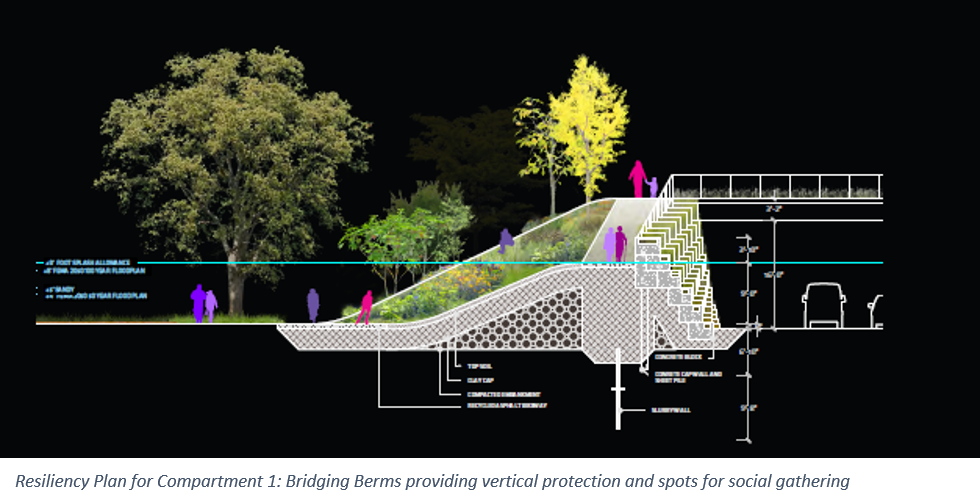 The first compartment, the East River Park, has bridging berms providing vertical protection and spots for social gathering. The berms are to be planted with a salt tolerant vegetation, providing a resilient urban habitat at the edge and filtering car exhaust from the adjoining FDR drive.

The second compartment, between the Manhattan Bridge and Montgomery Street in lower Manhattan will have deployable decorative panel walls attached to the underside of the FDR Drive, that can be flipped down when a flood event is anticipated or act as an inviting ceiling that adds lighting to the area at night and creates a seasonal market during the winter.

The third compartment, Battery to Brooklyn Bridge, has berms strategically located to protect the ducts of the infrastructure below and create a continuous protective landscape. The plan envisions a new building programmed as a maritime museum. An elevated plaza connects to an elevated bikeway/footpath, which in turn connects to a series of pavilions which provide flood protection.

FloodHelpNY.org, an organization funded through the New York Governor’s Office of Storm Recovery and New York Rising, provides a Home Resiliency Audit Program. After a team of professionals inspects a home, a report is provided with suggested retrofits for flood resiliency.

Resilience in Other Cities

Chicago is embracing resiliency through food security with vertical farms that use a small fraction of the energy and water required by conventional outdoor crops. Texas is incorporating fail-safe networks and spare capacity built into a city’s grid system to account for disruptions and surges in demand. The city of St.Paul replaced a demolished shopping center with restored wetlands, adding a stormwater retention system, preventing sewer overflow, fostering biodiversity and creating a beautiful public space.

In the coming decades, building resilience will be an essential and smart investment for cities all around the world. Both planning and timely implementation of climate resiliency strategies will be vital towards determining a city’s livability and its defense towards the looming climate calamities that await us.