Will Fossil Fuel Divestment Usher in a New Era of Sustainable Growth?

The fossil fuel divestment movement is gaining momentum as a large scale energy transition is underway. Over the past 5 years, major players have begun to divest from the fossil fuel industry and many financial analysts and environmentalists approve: not only is this the financially-savvy thing to do, it could play a major role in climate change mitigation and the shift to sustainable energy. 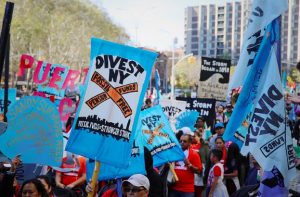 In 2011, passionate Swarthmore College students kicked off the very first fossil fuel divestment campaign in the United States, urging Swarthmore’s endowment to divest from coal immediately, and from oil and gas within 5 years. In 2012, environmentalist Bill McKibben and 350.org launched the Do the Math Tour, traveling around the world urging all institutions to divest from fossil fuels. In the years that followed, college students, activists, and environmental organizations held up bold signs, protested in the streets and on campuses, and spoke to huge audiences about the importance of the divestment movement.

The movement was gaining traction when an influential name in philanthropy made a big announcement. In 2014 the Rockefeller Brother’s Fund announced they would fully divest from fossil fuels by 2017. Next, global financial institutions and the world’s financial capital, New York City, jumped on board. Many of the major moments in the divestment movement have come from well known institutions who influence public opinion, hurt the reputations of fossil fuel companies, and receive tons of press. Leaders were sending the message that carbon does not have a future.

The movement started from a moral and ideological standpoint but the financial incentives alone are causing companies to take notice. While critics expressed concerns over the effects it would have on pension funds and corporate profits, studies have shown that divesting from fossil fuels is a sound financial decision.

Two Sides of the Coin

Environmental organizations are increasingly calling for divestment from fossil fuels AND investment in sustainable solutions. At the time of their divestiture announcement, the University of California had also surpassed their five-year goal of investing $1 billion in promising clean energy projects. Even fossil fuel companies are starting to get on board. Earlier this year, BP Oil announced plans to make their operations carbon neutral by 2050, and included on their list of “aims to help the world get to net zero”an increase in the proportion of their investment into non-oil and gas businesses over time. With the global clean energy market projected to grow from $928 Billion in 2017 to $1,512.3billion in 2025, there is clearly money to be made by doing the right thing for the planet.

It’s important to note that the divestment tactic alone is not enough to significantly decrease carbon emissions, but it can be a critical step. Not only does divestment move funds away from the fossil fuel industry and possibly toward renewables, it educates everyone on the importance of shifting to clean energy, and shapes public opinion, which in turn, can influence business decisions. While the big banks aren’t exactly taking an active part in the divestment movement, the news there is transparency. Morgan Stanley, Citi, and Bank of America announced this year that they will measure and disclose emissions from their lending and investment portfolios. That might not turn things around immediately, but in McKibbens’s own words, if we “make enough progress in our time…the next generation of people” will have a “reason to keep doing it.”