Last winter, legislation for a Green New Deal (GND) was written, and activists and politicians have been working to push the political agenda that aims to combat climate change. The charge was originally led by the Sunrise Movement, Congresswoman Alexandria Ocasio-Cortez (AOC), and Senator Ed Markey. (For more background on the history of the GND, you can read my first article here.) Since then, the GND movement has grown immensely and climate change has become a major topic for political discussion. 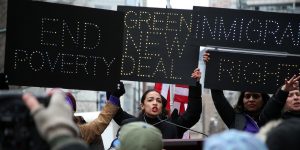 July 2019 was our hottest month on record, according to the National Oceanic and Atmospheric Administration. Scientists have been talking about climate change for over 30 years, and people around the globe are experiencing the effects.  Antartica is losing 6 times more ice mass than it was 40 years ago. Two thirds of extreme weather events in the past 20 years were intensified by climate change. Indonesia is moving its capital city of Jakarta because it is sinking 25 cm per year due to rise in sea level and subsidence.   Yet, among the doom and gloom we read about daily, there is lots of exciting progress happening.Forty-three members of Congress support creating a Select Committee for a Green New Deal. Among registered voters, there is strong bipartisan support. As might be expected, the majority of Democrats support a GND, but so do the majority of Republican voters. Congressmen Francis Rooney (Republican, FL) and Daniel W. Lipinski (Democrate, IL) introduced bipartisan bills that use carbon pricing to cut greenhouse gas emissions.    Cities Take the Lead Coast to Coast 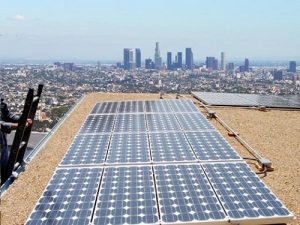 Even as discussions back and forth continue at the federal level, major cities across the U.S. have already put policies in place to reach the emission goals from the Climate Paris Agreement. Since cities are comprised of more than half of the world’s population and emit over 70% of the world’s carbon, their efforts could make a huge impact on tackling climate change.    Here on the East Coast, New York City has had components of the GND in place for several years, but just this past Spring Mayor De Blasio passed his own GND, the Climate Mobilization Act, a $14 billion investment in the city. Through retrofits and clean energy, NYC’s climate change policies incorporate creating new green jobs, an important aspect of the Green New Deal. NYC is committed to carbon neutrality and 100% clean electricity by 2050.   The groundbreaking Climate Mobilization Act is made up of six bills that will help cut carbon emissions 80% by 2050 and cut buildings emissions 40%. This policy is an important contributor to cutting emissions because NYC’s buildings make up 75% of the city’s emissions. The strategies outlined in the Climate Mobilization Act focus on energy analysis. The NYC retrofit accelerator offers free services to help building inhabitants evaluate their energy use and move towards greater energy efficiency. In addition, NYC plans to use Canadian hydropower to obtain clean electricity. 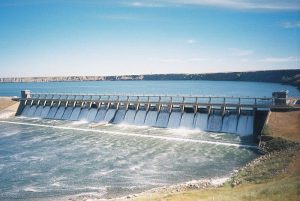 New York City is also in the process of expanding its curbside organics and composting programs, and is implementing legislation to limit plastic use, beginning with a plastic grocery bag ban in March of 2020. Plus the City is executing a $20 billion resiliency plan to protect flood-prone areas through guidelines for new projects, investments and buildings that use current climate change data on rising sea levels and temperatures. The East Side Coastal Resiliency Project is a joint effort by NYC and NY State to reduce the risk of flooding on Manhattan’s East Side from 25th Street to Montgomery Street. The project will integrate flood protection to the local neighborhoods.   “Every day we wait is a day our planet gets closer to the point of no-return. New York City’s Green New Deal meets that reality head on,” said Mayor Bill de Blasio. “We are confronting the same interests that created the climate crisis and deepened inequality. There’s no time to waste. We’re taking action now, before it’s too late.”   Out West, Los Angeles also launched its own Green New Deal in April 2019. L.A. has committed to 100% renewable energy use by 2045, mandated that all buildings become emissions free by 2050, and pledged to phase out styrofoam by 2021, and single use take out containers and plastic straws by 2028. Similar to NYC, L.A. included the creation of a Job Cabinet to create 300,000 green jobs by 2035.  “L.A. is leading the charge, with a clear vision for protecting the environment and making our economy work for everyone,” said  Mayor Eric Garcetti.  .

NYC and LA are just two of the cities working on climate change policies. In fact, 90 U.S. cities have committed to 100% clean energy and 6 cities have already met that goal: Aspen, Colorado; Burlington, Vermont; Georgetown, Texas; Greensburg, Kansas; Rock Port, Missouri; and Kodiak Island, Alaska. Burlington, Vermont became the first large city to meet its goal in 2015 by switching on its first hydropower plant and implementing an energy efficiency program to get citizens to use less power. Their power now comes from a combination of hydro, biomass, wind and solar. To prevent energy prices from rising for consumers, Burlington sells renewable energy credits.    Forward Motion Amidst the Bumps   While the GND rides its political rollercoaster, solutions through local policy are moving full speed ahead. This is a crucial and exciting time on the journey to reverse climate change. 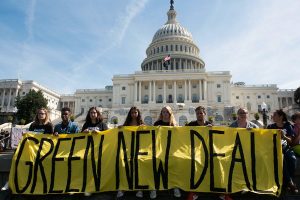