The Haven Project: A Greener Future for the South Bronx 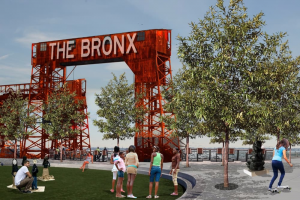 For decades, the South Bronx has served as a dumping ground for highways, waste transfer stations and truck-intensive industry.  Its residents breathe some of the worst air in the country, and yet the open space they need to mitigate their health problems is severely lacking, leaving communities feeling like they get nothing they do want, and everything they don’t.  Working to close this dangerous gap in urban planning is the Haven Project, a transformative master plan developed by New York Restoration Project (NYRP) to create a network of open spaces in Port Morris and Mott Haven in the South Bronx.

Building on 20 years of experience restoring parks in high-need communities, this is NYRP’s first neighborhood-scale effort. Using scientific evidence along with community input, the Haven Project team developed a plan geared specifically towards improving the community’s health and well-being by mitigating the disproportionate concentration of highways and industry with more open green space.

The South Bronx – Shouldering the Burden for New York City

Within the poorest congressional district in the country and the southernmost peninsula of the Bronx lie Port Morris and Mott Haven, minority neighborhoods bordered by as many rivers as they are by highways. The areas along the waterfront that were once used for recreation have since been replaced by industrial and commercial buildings that bring over 15,000 diesel trucks through local streets. Nearly one-third of New York City’s solid waste is handled in the South Bronx, burdening the residential areas with noise, pollution from diesel exhaust, and the stench of garbage.

These communities were not always denied access to their waterfront. Decades ago the 132nd pier was a valuable recreational space where kids would swim and enjoy the outdoors. But the pier was destroyed in 1989 when a severed gas line caused a deadly explosion. The area has yet to be restored, and today a barbed wire fence blocks the old pier’s remains.

Half of the area’s pre-Kindergarten to 8th grade students attend schools less than two blocks away from a highway or truck route. The asthma hospitalization rate for this same age group is three times higher than the citywide average. Instead of mitigating the area’s poor air quality with green space, City and State governments recently invested over $100 million to help build a new center for FreshDirect, a major trucking company, on one of the last remaining open spaces on Port Morris’s waterfront. The facility is expected to add a thousand more truck trips a day. 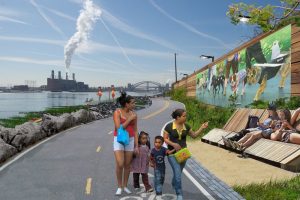 The Haven Project’s approach to community development is comprehensive and multi-disciplinary, following the conviction that every aspect of urban life “improves when our physical environment is greener, safer, and more beautiful.” The team developing the plan includes members of community advocacy groups, public health experts, data analysts, architects, and urban designers, making decisions based on scientific research and input from local residents. Between October 2014 and March 2015, the team hosted a series of public meetings for residents to share their local knowledge and articulate their wants and needs related to street connectivity, existing social assets and difficulties with physical barriers. The result is a series of measures designed to promote physical activity, pedestrian safety, combat climate change and increase social interaction.

NYRP will transform the Port Morris/Mott Haven area in multiple phases over several years. The first phase prioritizes the creation of safe and visual access to the Randall’s Island Connector, a new pedestrian bridge connecting Port Morris to Randall’s Island Park, one of the city’s largest recreational hubs. Research shows that access to large parks (greater than six acres) in New York City is linked to lower body mass index, likely due to the capacity of large open spaces to support physical activity. The new and improved access to Randall’s Island is a long-anticipated victory for South Bronx residents in need of recreational space, but while access to the Island has great potential to improve public health, the entrance to the Connector is surrounded by industry and the pathway runs underneath an Amtrak trestle, making it difficult to access. 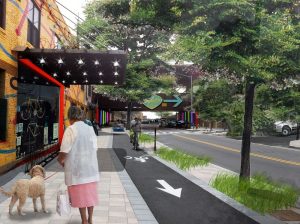 Phase One of the Haven Project focuses on creating safe and welcoming connections for residents across physical or perceived barriers, such as those surrounding the Randall’s Island Connector. Research suggests that safe street conditions are associated with increased walking, biking and outside play for children. But more than physical safety, the team found that perception of safety is a greater predictor for social connection and stress. Based on this knowledge, the problem areas identified by the community will be addressed using measures to improve derelict and vacant lots, provide better lighting, and plant trees. NYRP will also focus on creating open spaces on the waterfront, close to the Randall’s Island Connector, which will offer safe recreational opportunities and better air quality.

Great Plan. But Will It Work?

The development of the Haven Project has been shaped by a carefully considered and ambitious set of values. But the process won’t stop once construction is completed or once programs have been set in place. To ensure the success of such a complex framework, NYRP will work with partners to collect data to measure its progress. Estimated tree canopy area, asthma related emergency room visits, and percentage of residents reporting that they trust their neighbors are just of three of the 100+ indicators identified by the team to evaluate the Project’s outcomes.

The fact that public health is intimately linked to the environment may seem obvious, but rarely is that connection so explicitly made as it is here. As exciting as it is that these long-overdue projects will serve these criminally under-resourced communities, what’s perhaps more interesting is how the measurements of all these indicators before and after implementation can help us understand the link between urban design and urban life.