Via Verde — A new model for green, affordable housing?

Via Verde is a new mixed income, mixed use residential project in the South Bronx. It’s name, Spanish for “the green way” captures the ethos of its design and the philosophy being handed over to residents, moving in this winter.

At the heart of the project is a dynamic garden and series of green roofs that serve as the organizing architectural element and identity for the community. As the building steps up from 3-story townhouses at the south to a 20-story tower at the north, there are a series of green roofs and south facing solar panels. The facade features aluminum, cement, and wood panels with panoramic windows, sunshades, and courtyard balconies.

Developed by Phipps Houses and Jonathan Rose Companies with Dattner Architects and Grimshaw, Via Verde was the winning response to the New Housing New York (NHNY) Legacy Competition sponsored by the New York City Department of Housing Preservation and Development (HPD), and the American Institute of Architects New York Chapter (AIANY).

It isn’t hard to see why only 30 units are left to be sold. If you weren’t convinced by the rooftop orchards, the in-unit washers and dryers, ceiling fans or lower utility bills, perhaps the price will move you: two bedrooms start at $146,000 — which works out to less than $1,600 per month in monthly costs. To apply for a unit, income restrictions do apply, see the application section of the Via Verde website.

Also: look for a GreenHomeNYC tour later this year of Via Verde! 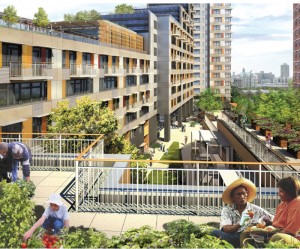 A rendering of the green mixed income, mixed use project in the South Bronx.