On August 23, 2018, in partnership with the Bard MBA in Sustainability Program, GreenHomeNYC proudly presented global sustainability pioneer and founder and president of Natural Capital Solutions, Hunter Lovins. Dubbed a “green business icon” by Newsweek, Lovins is a renowned author and has been a champion of sustainable development for over 35 years. She has consulted on business, economic development, sustainable agriculture, energy, water, security, and climate policies for scores of governments, communities, and companies worldwide, and now teaches Sustainable Management at the Bard MBA. Her keen ability to both grasp the biggest picture and dissect the smallest components of that picture with laser precision have made her what Time magazine has called “a millennium hero for the planet.”

The Mother of All Disruptions

The focus of Lovins’ talk was “The Power and Potential of Local Action on Sustainable Business Growth and Community Development.” To set the context, she started big. Citing Jane Jacobs, author of Cities and the Wealth of Nations, Lovins pointed out that cities have always been the engines of prosperity. Mega cities with populations of 10 million or more are growing around the world. “Figuring out how to build sustainability, livability, and prosperity in these mega cities is the challenge before us,” said Lovins.

“We know how to solve the climate crisis,” Lovins declared with a defiant optimism, citing such statistics as:  Cost is no longer an impediment. Solar is much less costly than fossil fuels, and wind is even cheaper. We already have the technology. China has 20 ‘giga-factories’ for batteries that will come online in 2020.” More electric vehicles have sold in the first half of this year than were sold all of last year, according to a new Bloomberg report. In fact, China has said they are phasing out the internal combustion engine. 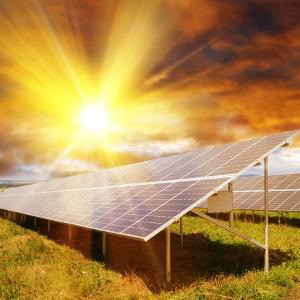 The autonomous electric vehicle will be tenfold less expensive to own, use, insure, and maintain than the internal combustion engine cars we’ve been driving. Throughout history when a new technology has been that much cheaper, it has replaced the incumbent technology. “If Stanford University economist and best-selling author Tony Seba is right about an impending 20 to 30 trillion dollars in stranded fossil assets,” she warned, “this will be the mother of all disruptions.”

As though homing in on a town on Google Earth, Lovins zeroed in on the critical role of community in building the sustainable, livable, prosperous planet. “We in the rich world consume 80% of the world’s resources. That is not sustainable. For everyone to live that well, we’d need three earths worth of resources. It might be better to focus on how we can meet our needs locally and sustainably,” said Lovins.

Lovins quoted poet, novelist and environmentalist Wendell Berry, “What I stand for is what I stand on . . .A place of safety can only be the community . . .Upon that depends everything we still claim to value…Human life, as most of us would like to define it, is community life.”

Lovins pointed out that “Good localization is based on decentralization. It calls on us to shift our focus from public/private adversaries to community and business leaders building community capital, from jobs and wages to ownership and investment income, from global markets to local exchange, and from exports to resource replacement.”

Localization, as Lovins describes it, is not about sacrifice, small-town living, rigid self-sufficiency or what she referred to “autarky,” abandoning technology and travel, nor the end of global communication networks. Rather it’s about ensuring that all people can enjoy sustainable livelihoods, authentic local culture, and the return of control to the local level. It emphasizes local provisions over imports, and restores ownership and decision making to local communities.

Localization works because you increase the local multiplier and money gets recirculated within the community, rather than “bleeding out,” Lovins explained. Communities prosper when job creation comes from developing local companies, rather than enticing outside companies to set up shop. For every dollar spent at a local business, 45 cents goes back into the community, whereas that same dollar spent at a corporate chain returns only 15 cents. To put that into perspective, “shifting 20% of Seattle area food dollars to local direct spending would add $500,000,000 in annual income in King County alone,” Lovins calculated. “One thing that drives economic prosperity in a community is entrepreneurialism,” she added. 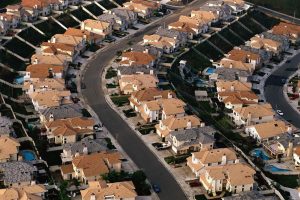 Energy Efficiency as a Local Commodity

While energy efficiency measures are increasingly being put into place in cities like New York to help reduce our fossil fuel dependence and emissions, it turns out they also build local prosperity by keeping the money in the community. A typical community spends more than 20 percent of its gross income on energy “and 80 percent of those dollars immediately leave the community,” said Lovins.

She recalled that despite many attempts in recent history, the US has not been able to implement a national energy policy. But perhaps that is not a bad thing, if communities take up the challenge: “Washington has no idea about the leaks around your windows,” she quipped. “It’s the inefficiency of buildings in a community.” So, when the town of Osage, Iowa, faced with the need to build an expensive new power plant to handle their increasing energy demand, they turned to energy efficiency instead, they showed that this approach is great economic development. The town ended up saving a million dollars a year, and cutting electric bills to half the state average, rather than sending money out of the community to fund the new plant. Lower rates brought a new factory to town, so the city utility redoubled its efforts to cut energy bills. The results show in a healthy Main Street.

The “new paradigm” of localization will replace “growth at all costs” with “real wealth,” and will be achieved when we enhance all forms of capital, “not just money and stuff,” said Lovins. We need to develop a new set of  metrics of success that also include enhanced human capital, historic and cultural capital, built capital, potential exchange capital, institutional capital and the rule of law, and natural capital, to name a few. That calls on communities to recognize all the capital in their midst. “What is the capital in your community?” Lovins asked the audience. “Who has it? Who can plant a garden, sew a quilt, set a bone, teach children? What do you have and what are you lacking that you need to have to sustain yourself locally?”

Essentially, these kinds of questions are the short form of what Lovins calls “Capital Stock Evaluation,” an analysis that kicks off a localization effort and looks at every nook and cranny of what makes a community function and flourish, as well as where its challenges and opportunities lie. The inquiry is divided by the various form of capital, and within those categories, it probes a wide range of issues and attributes, from support for the elderly and education for the young, to trust and social cohesion, to access to technology and available loans and investments.  It examines the availability of housing, healthcare, business facilities, and waste management infrastructure, assesses the community’s confidence in the legal system, and much more. 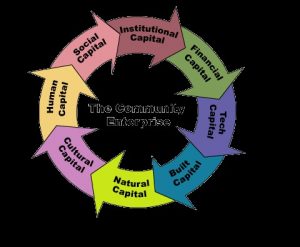 This kind of analysis ultimately leads to multi-pronged solutions. For example, in Curitiba, Brazil, when gangs vandalized the city’s new Botanical Garden, seeing the vandalism as a cry for help, the city hired gang members as assistant gardeners. The city of Eugene, Oregon embarked on a Vendor Matching Program, which links local-business buyers with local suppliers. The city created 100 jobs in a year without physical expansion, by asking what businesses were buying from outside and matching them with local business.

Big answers like these emerge from a systems approach, in which you “treat all issues as component parts of a challenge and each problem as interrelated with others.”

It turns out the best teacher of systems thinking is nature itself. In mature ecosystems, “waste is not waste.  It’s a resource,” said Lovins. “Natural ecosystems don’t draw resources down faster than they can be replenished. They’re in balance with the biosphere. Mature ecosystems are diverse. Creatures within them cooperate rather than compete. They use energy efficiently, and they use materials sparingly. They optimize, rather than maximize. And they don’t foul their nests.”

Flood-prone Curitiba, has taken several pages from nature’s textbook. Too poor to have single purpose solutions,  they have turned to whole system design. They switched their focus from fighting flooding to seeing water as a habitat and they  built a park.  In fact, they built a number of parks. “Riparian-zone protective laws turned riverbanks into linear parks; small ditches and dams formed new lakes, each the core of a new park. This ‘design with nature’ strategy stopped the flooding, and cost less than traditional flood-control methods,” Lovins described. 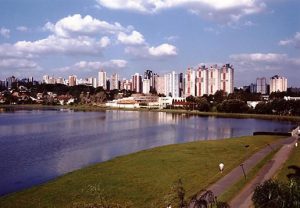 LASER: Homing in on Your Community

If “resources” was the operative word of the evening, Lovins has certainly amassed plenty of them over her 35 years of saving the planet, and she’s more than happy to share them. In keeping with her lifelong commitment to helping change-makers succeed, she offered up LASER or Local Action for Sustainable Economic Renewal, a tool that pulls together all the principles she talked about this evening into a blueprint that can be used to create sustainable, empowered, and economically sound communities.

LASER is a step-by-step guide that can be used in any designated community, whether it be a neighborhood, a town, a city, or, as in Brazil, a biome, and it is available free of charge on Lovins’ Natural Capital Solutions website. At the risk of oversimplifying the detailed and rich process described in the 178-page workbook, LASER looks basically like this: Start by reviewing local assets and talking to stakeholders. Create a “soft model” and analyze it, relate it to the city’s or community’s sustainability goals. Prioritize strategies and coordinate them with existing goals. Implement those strategies, integrating them across the community, measure progress and go again.

Lovins stressed the importance of “a through-line of stakeholder engagement,” reminding us that this is “not a top-down process. This is sitting down with your neighbors, going door by door by door. Not only will members of the community provide critical personal insights, their early and ongoing involvement will also increase engagement and help facilitate the change process.” It’s the stakeholders who best understand what the community needs and where its risks lie, and it’s these people who will develop and share the soft model, evaluate it, and make the adjustments that will lead to solid implementation.

Engagement is also what drives Lovins’ practice. Sustainability rock star though she may be, she views her work fully through a collaborative lens. Lovins developed LASER in partnership with Natural Capital Solutions’ Christopher Juniper; Gwendolyn Hallsmith, Bernard Lietaer, and Wayne Fawbush of Global Community Initiatives; and Michael Miller of America’s Development Foundation, based on their combined experience in economic and community development. And as far as Lovins is concerned, LASER remains a collaborative process. “There is nothing sacred about these ideas,” she told the audience. “You can do it better. Take these ideas, make them your own, and let us know how we can do it better.”

Lovins also mentioned the soon to be released tool, Solutions at the Speed of Business, which will be available on Natural Capital Solutions website in late 2018. Watch for it and download it—at no cost.

Her new book, A Finer Future: Creating an Economy of Service to Life, will hit bookstores the 9th of October.

*Special thanks for the hard work of the Bard and GreenHomeNYC teams for making this  important event possible.