What do the world’s largest landfill restoration project and New York City’s first net-zero energy school building have in common? They are just two of the notable projects currently in development on the borough of Staten Island. Join us at our July forum to learn more about the exciting green initiatives taking place in the borough as our speakers present a snapshot of the endless possibilities of sustainable projects underway in New York City. 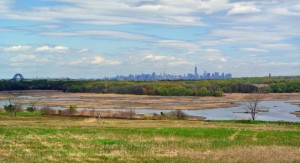 This forum is free and open to the public!

About the projects featured in this forum:

At 2,200 acres, Freshkills Park will be almost three times the size of Central Park and the largest park developed in New York City in over 100 years. The transformation of what was formerly the world’s largest landfill into a productive and beautiful cultural destination will make the park a symbol of renewal and an expression of how our society can restore balance to its landscape. Read more on the Freshkills Park Alliance website.

P.S.62 will be the first net-zero energy school in New York City and one of the first of its kind worldwide. The 68,680-square-foot, two-story school will serve 444 pre-kindergarten through fifth grade students. When completed, the cutting-edge building will harvest as much energy from renewable on-site sources as it uses on an annual basis. Read more on the SOM website.

The Living Roof, originally installed by the Borough Presidents office of Staten Island in 2004, sits atop a water filtration building located at the Department of Transportation’s Staten Island Ferry Terminal in Saint George, Staten Island. This building was one of New York City’s first rooftops to utilize the emerging green roof technologies, being explored as an innovative building solution for new and existing urban environments. Read more on the Living Roof website.