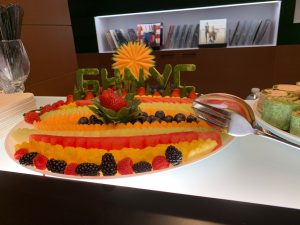 On April 17th, GreenHomeNYC presented its Annual Patty Noonan Memorial Policy Forum at the Hafele Showroom. This year’s focus for the Forum was Policy Action on Climate Change, which also centered around the Green New Deal legislation recently introduced by Congresswoman Alexandria Ocasio-Cortez. The three presenters shared personal activism stories as well as highlights of the work their organizations are doing on topics such as the transition to clean energy, bridging the gap between energy and affordability, and reducing carbon emissions in the U.S.

The event opened with Daphany Sanchez, who is the Founder and Executive Director of Kintetic Communities Consulting. The decision to found her company was catalyzed by her and her family’s experience during Superstorm Sandy, which devastated the Staten Island home they had recently purchased. She witnessed first hand the inequality in her community and saw how difficult it was for many to receive help or to be prepared for this kind of devastation. As a result, she now  works with utilities and government agencies to develop efficiency solutions to create financial, environmental, and health benefits to underserved New Yorkers. 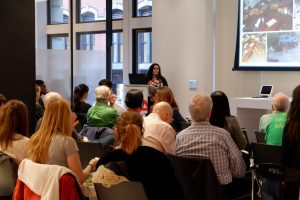 Daphany spoke about several considerations under the Green New Deal that can support such benefits, including economic development through employment of community members and community investments in upgrading infrastructure and reducing climate risk. These pillars of the Green New Deal integrate low- and moderate-income communities into the fabric of a better future. If New York can lead by example with its hiring practices, employment opportunities, transparent partnerships and clear goals, Daphany was sure the City could be a champion for all the Green New Deal has to offer. 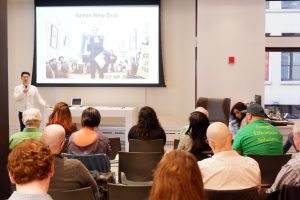 Next up was David Xia, a member of the Sunrise Movement, which is a nationally-based, volunteer-led organization whose goal is to stop climate change and create good jobs in the process. David also had a personal experience that influenced him to join the Sunrise Movement: He saw it as an investment in the next generation’s well-being, just as his parents had invested in him with the gift of a musical instrument when he was young, although they had very little money to spare at the time. Similarly, David believes that if we all could spare a little of our time, we may be able to ensure the future of our planet for the generations that will continue to inhabit it.

The Sunrise movement wants everyone to know that climate change is real and it is happening, but more importantly that we have the solutions to curb it if we can just get past the fossil fuel CEOs and corrupt politicians that are blocking  action from happening. To this end, the Sunrise movement is engaged in direct action and electoral work, pushing decarbonization of the economy, and trying to secure a socially just transition for communities.  To do this, the Sunrise movement is working to build an army of diverse, young people that has the power to mobilize millions, as well as encouraging the election of enthusiastic supportive public officials who will fight for all, and not for corporate interests. At the end of David’s talk, he encouraged all who wanted to get involved to subscribe to the Sunrise Movement updates from their website and to join a local hub or attend their upcoming events. 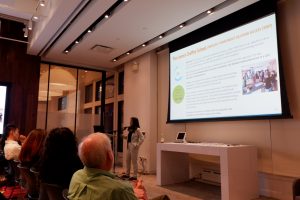 The final speaker of the night was Leticia Colon de Mejias, who is the Founder and CEO of Energy Efficiency Solutions. Leticia shared some of her experiences of talking “across the aisle” about energy efficiency, as  it shouldn’t be viewed as a “red” or “blue” issue.  When speaking with conservatives who may not be initially supportive of environmental or sustainability initiatives, Leticia would talk to them about the economic benefits, savings (on energy waste), and job creation, to create what she calls positive, equitable energy policy outcomes. She pointed out that whether or not you believe that humans are the cause of climate change doesn’t matter as long as our common goals of reducing energy waste and being sustainable are met.

Once you have committed to curtailing our energy demand, the next natural question is to ask, “What is demanding the energy?” The answer, as Leticia explained, is not the transportation sector, which is sometimes represented as the biggest user of energy, but the buildings sector, which is comprised of electrical power generation and residential, industrial and commercial buildings.  Once these three categories are combined, they outpace the energy consumption of transportation by far. By tackling these sources of energy demand to lower emissions, we can achieve our common goals of less pollution and lower costs, which means better health and fewer environmental harms, as well as economic growth. These outcomes are a win-win for all! 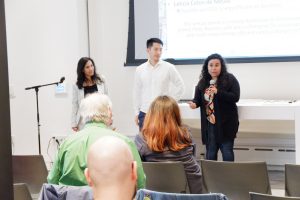 When the night was over, the audience had an abundance of questions and kept the conversations flowing after the presentations. It was especially inspiring to hear from these speakers during Earth Month, as their work and political activism are so critical in addressing the threats posed by climate change. It is certainly worth keeping an eye on these organizations and the work they are doing.

This event honors the memory of Patty Noonan, a former activist who spearheaded community development in lower Manhattan in the 1970s. Although environmentally sustainable housing was not widely studied at the time, Patty Noonan advocated for and succeeded in pushing for sustainability in affordable housing in NYC. GreenHomeNYC organizes an annual forum to honor Patty Noonan’s passion and commitment to sustainability, and will continue the important dialogue set forth today in next year’s panel discussion.

GreenHomeNYC would like to thank our gracious hosts at the Hafele Showroom for having us this month. Hafele actively embraces sustainability practices as an integral part of their common philosophy and is a great partner to GreenHomeNYC.

GreenHomeNYC would also like to thank Seon Pollard, a Journalism student at Hunter College who graciously covered this event. For a video of his coverage of this event, please visit https://seonpollard.wordpress.com/climatechange