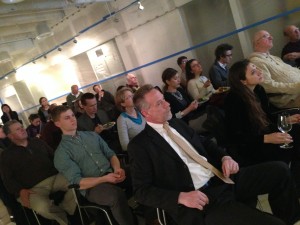 New York City is a city that is always moving. In February, generously hosted at the GE Monogram Design Center, GreenHomeNYC heard from three speakers about how to make New York City move cleaner, faster, and more efficiently.

First, Christina Ficicchia, Executive Director of Empire Clean Cities described the Empire Green Fleet (EGF) program. This program works with fleet managers to track vehicle use information to help them reduce fuel use and run more efficiently. Fleets earn points when they make changes to become cleaner and more efficient. These changes include: reducing their fuel use, switching to alternative fuels, and decreasing CO2 and particulate emissions. With these points, fleets earn “green apples”, three apples being the highest performing fleet. The EGF program is a way for companies to open up to sustainability practices while simultaneously improving their bottom line and contributing to better air quality for all.

Next, John Shipman, Head of the Electric Vehicles Program at ConEdison, spoke. He took us for a ride through the history of the electric vehicle (EV), including how Con Edison has been utilizing, testing, and advancing EVs since their early days. Mr. Shipman, who also works on ConEd’s Commercial and Industrial efficiency programs and demand management, explained how EVs would not be a strain on the grid, provided they charged their batteries during off-peak hours. Alternatively, he proposed that energy from renewable sources, which can be difficult to store, can be used to power EVs. In short, his message was that EVs are part of the path forward to cleaner air and diversified power sources.

Finally, Charles Komanoff, Director of Komanoff Energy Associates, described the “Move New York” plan, which had debuted that week. The plan involves lowering fees for existing toll bridges in the New York City metropolitan area, adding fees (collected automatically) for all East River Bridges as well as adding fees for vehicular access to the Manhattan central business district (south of 60th street). This plan would reduce traffic as well as emissions, in the city, and provide funding for much needed improvements to roads, bridges and the public transportation system. Many people’s gut reaction to the plan was “they want to charge me more now”, but as Mr. Komanoff described his modeling methodology and the benefits this plan would bring to all New Yorkers, it became clear that this may be a road to follow to improve transportation in New York City. 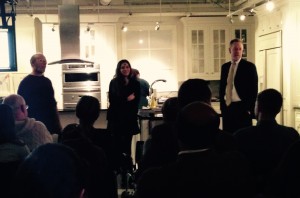 Following the presentations, there was an active discussion between the audience and the speakers, trying to better understand their programs and the opportunities they present for sustainability. These three speakers approached sustainability from three different perspectives. The Empire Green Fleet relies on monitoring and a rating system to affect change, similar to LEED, and appears to be an easy “no-brainer” path forward. EVs are dependent on technology and market adoption, similar to renewable energy technology, and it is easy to see how these can become more widespread in the near future. Move NY, however, requires us to reevaluate the entire system we have now and the way we use our resources, without objectively valuing them. It is very difficult to change a “free” resource (i.e. driving over the Brooklyn Bridge) into one with a cost. Like a national carbon tax, this is not an impossibility, but something that requires socializing and a cultural shift towards valuing the present (through tolls and taxes) in order to better plan for the future. All three types of programs presented at this GreenHomeNYC event are compatible milestones on the road to carbon emission reduction and a sustainable environment, but will require society wide behavioral shifts to reach the end of this road. In the meantime, these programs will help ensure that New York City keeps moving a mile-a-minute in the most efficient way.