Big windows provide beautiful views and that’s a key amenity when it comes to selling or renting space. But there are some downsides to living in glass houses. In this month’s Green Forum at DORMA Design Center, the spotlight was on windows – from their impact on living space to the latest options in high performance windows.

According to speaker Jaime Kleinberg, Advocacy & Research Coordinator for Urban Green Council, big windows do provide some advantages. Daylighting reduces electricity use while views of nature can be beneficial to a person’s well-being. But on the flip side, big windows bring privacy concerns, glare, noise, bird deaths (an astounding 90,000 per year in New York City alone) and the risk of dangerous indoor temperatures during power outages. One study by Urban Green looked at what would happen if a Hurricane Sandy-style event caused a prolonged power outage during the summer. In an all-glass high-rise, the indoor temperature was projected to reach nearly 105 degrees over a seven day period. 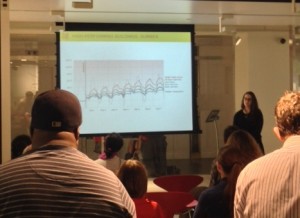 Yet tenants are willing to pay premium prices for a room with a view, so they must be enjoying it, right? As it turns out, maybe not. Kleinberg shared the results of another Urban Green study called Seduced By the View which set out to learn whether New Yorkers actually take advantage of those beautiful views.

Fifty-five buildings in New York, Brooklyn and Queens were photographed from all directions at different days and times. 37 were residential buildings and 18 were commercial properties. The photos were analyzed to learn what percentage of window area was covered. Although the study was based on a small sampling, it did reveal consistent patterns of behavior. About 59% of the window area was covered by blinds or shades and 75% of buildings had more than half their window area covered. The results were the same across residential and commercial buildings, regardless of the direction the window faced or the time of day.  Privacy issues may be one reason that people keep the shades drawn. The other may be comfort. Depending on the amount of window glazing, interiors may become too hot in summer and too cold in winter.

So it seems that people who live in glass houses aren’t looking out the window. As amusing as that sounds, the higher energy consumption, carbon emissions and air pollution resulting from glass buildings is a serious price to pay.
Kleinberg offered two steps to address the issue. The first is better design, including triple glazed windows, less conductive frames like fiberglass and the incorporation of two to three feet of insulated exterior walls below the windows.  The second is better communication by brokers so that tenants understand the downsides of all-glass buildings.

The second speaker for the evening was Aurimas Sabulis, Managing Director of Intus Windows, a manufacturer of high performance, energy efficient windows.  Intus aligns the performance of its products against standards set forth by the Passive House Institute.  Sabulis described these standards as being the fastest and most efficient way to achieve net-zero, high performance buildings. 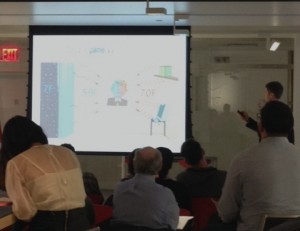 Sabulis began with a comparison of current practices versus best practices in the industry, as defined by the Passive House standards.  When discussing the energy performance of windows, the R-value is a widely used reference.  R-value measures resistance to heat flow, so the higher the R-value, the greater the insulation.  But recommendations for R-value vary widely.  For example, Energy Star recommends an R-value of 3 in northern climate zones, but Passive House guidelines recommend R7.  Sabulis noted that with a range so wide, there’s great opportunity for improvement.

But thermal performance is only one part of the equation.  When evaluating window performance, manufacturers and building designers need to give equal weight to air infiltration (commonly known as draftiness), sound insulation and overall comfort of the interior.  These are benefits of triple pane windows that contribute to tighter building envelopes and an overall reduction in the carbon footprint of the building.

Turning to the economic benefits of high performance glass, Sabulis shared the compelling case study of a Washington, DC charter school retrofitted with R7 triple pane windows.  With no other improvements to the building insulation beyond the window installations, the school has achieved energy savings of $72,000 annually. Most notably, there was no price increase to install triple pane versus double pane windows.  As surprising as that sounds, Sabulis explained that European manufacturers, like his company’s Lithuanian factory, made a shift in production methods many years ago.  As a result, triple pane windows can be produced more cost effectively than is typically possible by domestic manufacturers.  The affordable price-point, combined with re-education of architects, general contractors and developers, will be the keys to moving high performance windows into the mainstream.