By Tamanna Mohapatra   Imagine a city as a sanctuary for nature, solar panels on all buildings, no need for cars, and regenerative farming practiced everywhere. So began “Drawdown 2020: The Time is Now,” a Climate Week NYC  talk sponsored by Ethical NYC, Drawdown NYC, 350NYC, and Climate Reality NYC in September of 2020. 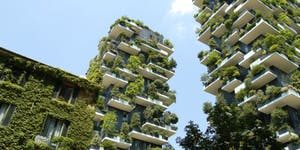 Founded in 2014, Project Drawdown is a nonprofit organization whose mission is to reach “drawdown—the point in the future when levels of greenhouse gases in the atmosphere stop climbing and start to steadily decline, thereby stopping catastrophic climate change — as quickly, safely, and equitably as possible.” The way forward consists of 100 plus solutions, each of which reduces greenhouse gases by  avoiding emissions and/or by sequestering carbon dioxide already in the atmosphere.   The breath and depth of these solutions are aptly captured in the title of the related book: Drawdown: The Most Comprehensive Plan Ever Proposed to Reverse Global Warming. Author Paul Hawken hopes to see all walks of society take responsibility fo getting the planet to Drawdown. “Our goal is to present climate science and solutions in a language that is accessible and compelling to the broadest audience, from ninth graders to pipe fitters, from graduate students to farmers.” Importantly, the solutions are directly correlated with the sustainable development goals, which should also help foster wider acceptance and understanding of the solutions around the world. The drawdown Drawdown Framework is a system of solutions in three connected areas: Reduce Sources — bringing emissions to zero Support Sinks — uplifting nature’s carbon cycle Improve Society — fostering equality for all 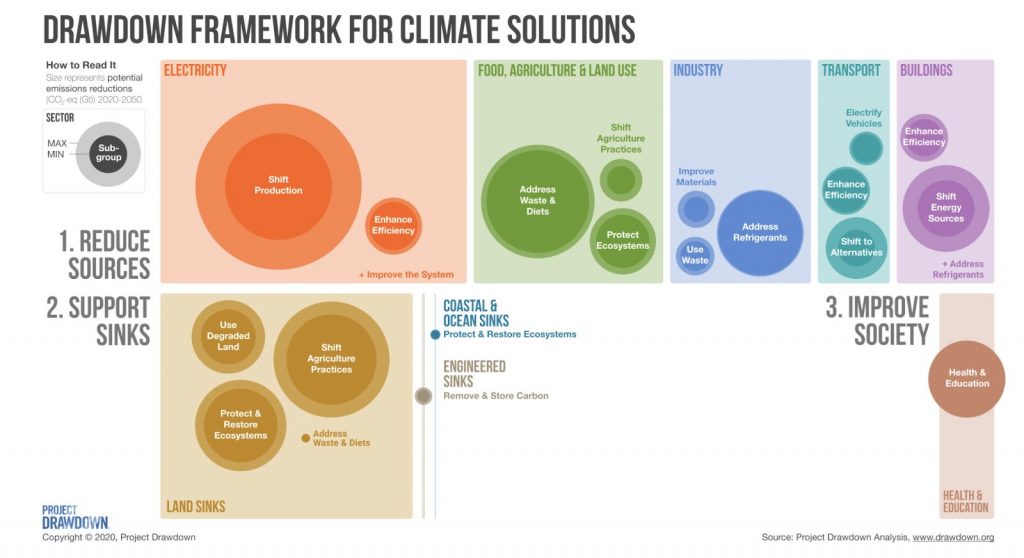 The moderators of the online Climate Week event were Lynn Twist, Co-Founder Pachamama Alliance, a ”global community that offers people the chance to learn, connect, engage, travel and cherish life for the purpose of creating a sustainable future that works for all,” and Amanda Joy Ravenhill, Executive Director, of The Buckminster Fuller Institute, which was founded to help bring about “a climate rebirth.” The speakers included scientists, business leaders, artists, students and more. Here are some highlights.

Getting to Drawdown: Challenge Existing Systems and Engage All Sectors   “There is a  future where drawdown is possible BUT only when we challenge existing systems,” said speaker Chad Frischmann, VP Research for Project Drawdown. Some of the critical solutions include designing for reuse rather than end of life, using renewable materials (such as bamboo), eating  less meat, reducing food waste to feed the world’s hungry, and practicing regenerative and ocean farming.   One revolutionary concept is 3D Ocean Farming, pioneered by Bren Smith, a lifelong commercial fisherman, and Executive Director and Co-Founder and owner of Thimble Island Ocean Farm. Smith was named one of Rolling Stone magazine’s “25 People Shaping the Future” and featured in TIME magazine’s “Best Inventions of 2017.”   Smith’s approach to farming, which requires  zero inputs—no water, no land, no fertilizer.  In production in over 23 countries, the resulting product (mainly kelp) is highly versatile. It can serve as food, replace plastic, and be composted for fertilizer. It captures nitrogen and carbon, both key contributors to global warming. According to Smith, the process truly connects our oceans and our atmosphere, all the while creating meaningful jobs.   Jamie Alexander, Director of Drawdown Labs,  pointed out that “most climate solutions don’t scale themselves and need help from the biggest accelerators, which include activists, policy makers, the young citizens of the world, and also the private sector.”  Her focus is in the private sector, through partnerships with next generation sustainable companies working to deploy climate solutions at scale. She showcased a few: Copia, which has built proprietary technology to help connect companies to non-profits in order to reduce food waste. Allbirds, a shoe manufacturer whose production process has the lowest carbon impact among shoe companies,  as well as a self imposed carbon tax. They created carbon negative shoes and then open sourced the technology so anyone in any industry can use it.   Impossible Foods brings tasty meat-like products to the public without involving animal agriculture, which is solely responsible for 15% of GHG emissions. Grove Collaborative sells eco-friendly cleaning and personal care products, unlike traditional cleaning products that rely on deforestation. In addition, they have a goal to actively contribute to reforestation by partnering with Arbor Day Foundation to plant a million trees. Senator Cory Booker represented the policy perspective on making these solutions real. As one of the original co-sponsors of the Green New Deal, legislation that aims to address climate change and economic inequality, Senator Booker reiterated that changes need to be made in all sectors, including electricity and transportation. He expressed the importance of the entire spectrum of solutions, from complex technological innovation to simple actions such as planting trees. That’s why he also introduced the Climate Stewardship Act in 2019. 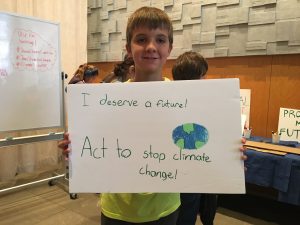 The key message from Alexandra Villaseñor, the young and upcoming internationally recognized environmentalist, author and founder of several environmental movements, was, “Involve young people in all conversations so that there is intergenerational dialogue and action too. In the end, climate change, and all its implications, is something that impacts the future generations the most.” Villaseñor received the Rachel Carson environmental justice award at the age of 15 and is also the founder of Earth Uprising International, a non-profit forum for youth climate activists.

Hope Beats Fear   All the speakers agreed that in order to accomplish the drawdown goals we need to change the culture of confrontation to that of innovation. We need a new way of seeing—understanding interconnectedness of humans with nature. And we need to tell stories— positive stories. Telling people “we are up the creek without a paddle” only causes “numbness, despair and denial,” said Hawken in a recent interview on the  Sierra Club Podcast, The Overstory, “Every problem,” he told his listeners “ is a solution in disguise.”  Ravenhill reminded us that “pessimism  is a luxury of  a less urgent time…there is no need to be pessimistic, just a need for continuous and collaborative action.” The payoff is big, according  to academy award winning visual storyteller Louie Psihoyos.“Once you get 10% of the population 100% committed to a cause, it’s unstoppable.”   You can hear the full recording of  “Drawdown 2020: The Time is Now” here.
Tags: Climate Change, Drawdown, global warming, sustainable development