Energy Efficiency: It’s All About the People 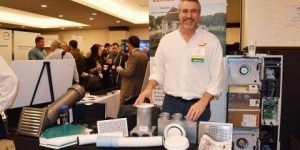 After attending four panel discussions and taking several turns around vendor exhibit floor of the 2016 BuildingEnergyNYC conference, one thing became perfectly clear. When it comes to sustainability and energy efficiency, there is no shortage of tools: codes, incentives, certifications, technology, data collection, and some incredibly innovative products and services. But the biggest takeaway was the the need to clearly decipher this complex landscape in order to achieve meaningful behavior change among all the stakeholders involved. Said Saheel Chandrani, Senior Account Executive at Johnson Controls, “The big thing we miss out on is the people.”

The Challenge
According to Richard Yancey, Executive Director of the Building Energy Exchange, “The educational issue is a big component” in achieving sustainability compliance among building owners. “People are scared of doing things differently.” Mike Davis, Senior Program Officer at the Local Initiative Support Corporation (LISC), feels it’s especially important to provide a clear understanding of available resources in order to help owners “navigate the space.” Chandrani described things from the tenant’s viewpoint: “How do you use energy data to get people to care? That’s the hardest part.”

Showcasing the success of New York City’s increasingly stringent energy codes is an effective way to reinforce positive behaviors already taking form. Sean Brennan, Research Manager at the Urban Green Council said, “The key is making sure the message gets out to the public, so they know it’s working.” But Roya Kazemi, Director of the GreeNYC program at Mayor’s Office of Sustainability, sees “voluntary behavior change as the missing part as the code gets developed.” Danielle Spiegel-Feld, Executive Director at the Guarini Center on Environmental, Energy and Land Use Law, NYC School of Law, is concerned that there’s “very little knowledge in consumer markets that the data even exists.” One reason she says is that “it’s buried” on the “not user-friendly, not heavily trafficked New York City Department of Finance website.”

In addition to creating platforms for more for accessible information, framing the story in a context that stakeholders can relate to is key. Kazemi said that the environmental message isn’t always effective and that “being heavy handed with guilt and fear and shame doesn’t work.” Yancey warned against a “saving the polar bears” message for tenants, and suggested a focus on benefits such as comfort and well-being. Phil Madnick, Program Manager at Con Edison’s Multifamily Energy Efficiency program, cautioned against “go[ing] in there and talk[ing] about climate change” with building managers, who are more interested in the bottom lin. Loic Chappoz, Project Manager at NYSERDA, believes that property owner-managers will “respond to a good business case.” And Kazemi stressed the importance of making “wonky academic speak accessible” to all stakeholders.

Kazemi believes that New Yorkers want to do their part but aren’t sure how. Chandrani suggested sharing data in a way that will give people at least a “rough idea of my impact on my building.” Davis pointed out how important it is to “get people in the same room,” referring to building owners, housing agencies, utilities, and tenants, and added that developing trust is an essential ingredient. Madnick believes that trust is built through partnering with organizations that stakeholders already turn to. For connecting on affordable housing retrofit initiatives, he suggested going through community based organizations; for coops and condos, it helps to partner with such groups as the New York Council of Coops and Condos (CNYC). Davis also suggested looking to less formal connections, reminding us that “building owners talk to each other.” Site Manager for Marion Scott Real Estate Lance Williams, who manages a Brooklyn Mitchell Lama Coop said, “my job is to let my fellow property managers know.”

A Picture is Worth a Thousand Words

For consumer-facing messages, visual images are just as important as language, and the medium is often the message. Spiegel-Feld suggested adopting the real estate advertising requirement used in Denmark. In addition to the usual photo, building type, square footage, and number of rooms, ads, which are laid out in a consistent format, must include an energy score. While Denmark has required energy benchmarking since 1997,  meaningful change only began to occur after July 2010, when the advertising requirement kicked in. Before that date, properties with high energy grades sold for 2.4 per cent above low-rated properties, but once the grades were added to the advertisements, properties with high grades sold for an average of 10.1 per cent more. Another consumer-focused approach, which is used in Spain, is to place labels on buildings that are much like those we see on restaurant fronts in New York City. These use a color-coded bars indicating energy efficiency ratings ranging from A through G, which transition from green to yellow to red, as the rating gets worse.

GreeNYC has already seen success with its Small Steps, Big Strides campaign, which engages consumers in actions to reduce energy use, eliminate waste, and choose a more sustainable lifestyle. Ads featuring the friendly Birdie mascot appear on transit and bus shelter ads; Birdie can also be found on the GreeNYC website, Twitter, Facebook and Instagram. The City’s program offers specific actions New Yorkers can take at home, at work, and on the go, and includes a BYO pledge program that rewards reusable bottle users with a free reusable bottle, mug, or bag, each of which has a picture Birdie printed on it.

So What Does it Take?

Communicating this complex web of information starts with some pretty basic premises: segment your audiences, frame your messages positively, focus on doable action, simplify information, promote engagement and interaction, build trust through networks and partnerships, and use visuals as well as words. Belgian architect, ULB Brussels professor and publisher, and passive house champion Sebastian Moreno Vacca may have summed it all up in the simplest terms. In his estimation, a communication program that works reaches all stakeholders in a manner that everyone can understand, “even my grandmother.”