This documentary is in the same vein as the other popular “The Story Of…” series that first came to the public’s attention from founder Annie Leonard in 2007.  I remember being very influenced by ‘The Story of Stuff’.”  This movie is no different. The opening scene is a bit jarring yet somehow familiar…islands of dirty plastic with people swarming through it. The folks handling the heaps of plastic seem somewhat resigned  to this fate. 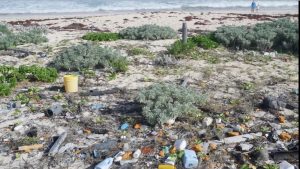 What is the Story of  Plastic? Where does it come from? Why is it so ubiquitous? What, if anything, can we do about it? These are some of the questions this documentary explores in some urgent depth.

For most of us who know the implications of  too much plastic in our lives, this movie is a great reminder of why we should keep at the fight, even if it is as the movie describes, “trying to remove water one teaspoon at a time while the tub is being filled with the tap fully open.” However, the main audience for this movie are people who are uncertain about whether and how they can change. For them, the film drives home how out of control the production, use and disposal of plastic has become on our planet, and that NOW is the time to act in some capacity to change this story.

The movie covers the production of plastic and how it was initially a waste product of petroleum production. Besides being extremely cheap to produce, its durability is also what makes it bad for the environment. Think of it as a double whammy leading to the omnipresence of plastic in our lives and in our world. Plastic production started at zero tons in the 1950s and was at 400 million metric tons by 2015. 91% of the plastic ever produced has NEVER been recycled. A sobering fact.

What is it about plastic that makes it so bad? In a word, single-use; we use an item only once, but it stays forever because it’s not biodegradable. Not being biodegradable means plastic creates havoc in our oceans, on our land, and in our bodies. In terms of climate change, the 7 most used and produced types of plastic produce GHGs. In addition to the production process, burning plastic in incinerators releases toxins (such as fly ash). Incinerators were once hailed as a good thing, killing two birds with one stone, so to speak. Get rid of plastic and generate energy. But in reality, even recyclable plastics are getting burnt.

The film also reveals the ugly fact of subsidized plastic production in the US. The cost to produce fossil fuel based plastic is kept artificially low with oil and gas subsidies—$5.2 trillion annually—thus disincentivizing use of recycled and other alternatives. This has to stop. The US shale industry creates a lot of raw materials for plastic production, which has so far also gotten plenty of government support.

One solution the movie presents is a concept known as EPR, Extended Producer Responsibility. For example, in India companies like Unilever and Nestle introduced the sachet concept of one-time use, very cheap, and very disposable plastic containers. But environmentalists in India are trying to end this practice. They want companies to stop treating plastic in different ways in different parts of the world.

Yet with all this, the movie ends on hope. There’s a lot that can be done to curb both plastic production and usage. Obviously, a problem as big as plastic needs a multi-pronged solution. Recycling is no longer a great solution because there are no permanent recycling markets for us to send all our plastic to. Reduce and Reuse and, most importantly, Avoid plastic are much better and longer term solutions.

The key lesson the movie stresses is that plastic usage is driven by supply not by demand. Yet consumer behavior has its place in the list of solutions. Zero waste, where all materials are either composted or recycled, is a behavior that’s slowly catching on. Demanding that companies replace plastic that can’t be recycled with biodegradable and bio-based materials could also be on the spectrum of future solutions. 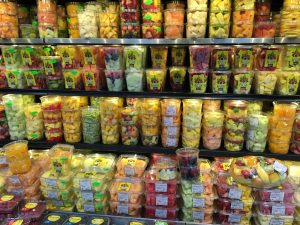 After spending two thirds of the movie losing hope in the state of the world, I ultimately found some cause for optimism. The solutions the movie presents to abate the crisis, although not immediate, are  still promising enough to make this a movie worth watching. In the end, plastics are a human-created problem and will need a human-centric solution, something we can work towards. One step in the right direction is  doing our part and sharing this movie with others who can take an active role too.