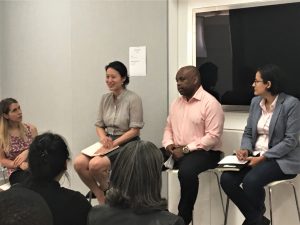 The June Green Careers event, held at GroheLive! Center, focused on women and minorities in the green sector.  Former Green Careers Lead Volunteer, Samantha Yost hosted the event, the topic of which holds special meaning for her.  As an LGBTQ woman, Yost believes that GreenHomeNYC “had her back” and helped her break into the sustainability field.

Our panelists for the evening spoke about their experiences in the green sector as either a woman, a minority or both.  Julianna Wei, Energy Engineer and Technical Project Manager at TRC Energy Services, is a female engineer of Chinese descent, who as a child, was a minority in STEM (science, technology, engineering, and math).  She highlighted the importance of finding allies and mentors at every stage of one’s career. Mentors may not directly present themselves as such – it’s up to you to build the relationship through on-on-one, person-to-person discussions. She advised acknowledging the lack of diversity in a specific setting as objectively as possible without adding subjective commentary on how to deal with it.

Carl Haywood, Senior Project Manager of On-site Generation at Bright Power, presented a strong perspective on many aspects of minority participation in the green sector. Haywood came to the field from previous experience with the International Brotherhood of Electricians and has accumulated fourteen years’ experience in solar installation at eleven companies. Born in Barbados and raised in Brooklyn, he attended a school where he was one of eighteen black students out of 780 white students. His extreme discomfort struggling with minority status required that he overcome feelings of difference, which he said was necessary to thrive.

As a Latina, a refugee from Nicaragua, and a lesbian, Amalia Cuadra admitted to often being unaware of potential setbacks or difficulties until later in life.  Now the Director of Engineering at En-Power Group, she declared that striving for excellence in technical knowledge helped her overcome differences she would later see in the workplace. There are different social constructs that can play out as disadvantages.  For example, Amalia expressed a preference that a woman’s name not be attached to the content of a message because the subtle awareness of gender can affect how it is received. Taking up Wei’s point, she added it’s important to support each other as well as seeking out those who can support you.

After hearing their stories, Yost introduced findings from a recent BBC report that indicates the language used in a job description can statistically shape the outcome of respondents. For example, descriptions using the word “leadership” reduce the number of women applicants.

The panelists then fielded questions from Yost and the audience. Wei has learned that higher levels of performance by women or minorities may not receive recognition. Recognition, and corollary promotion, frequently requires that a woman or minority proactively point it out to a supervisor. She added that a true ally will not let you silently plateau, but will provide constructive criticism of your performance.

Continuing on the topic of recognition, Haywood said that you cannot expect someone to notice you; you have to raise your hand. In several cases he admitted he needed to shed old habits, embracing multi-culturalism to grow professionally.

Our panelists were challenged by tough audience questions on the progress of equality both within the green sector and within the renowned liberality of the New York City area. While all generally agreed that there has been progress in the last ten years, there is still room for improvement. Problems still arise for women in green jobs, especially with many men as property owners, contractors, and building managers. Further, there remain a lot of people of color in lower-level positions, but not at higher levels of the corporate ladder. Many energy-efficiency firms are, or are sometimes inaccurately represented as, white-male dominated.

Lastly, on a note that combined the evening’s topic with GreenHomeNYC’s greater mission, Haywood significantly pointed out that the resistance women and minorities in green jobs experience may not derive from personal discrimination, but instead come from resistance and fear of new sustainable practices and technologies replacing the safety net of business-as-usual. The event concluded with the observation that the audience consisted of 63% female and 75% minority attendees – one evening’s win for sustainable practices and social justice.