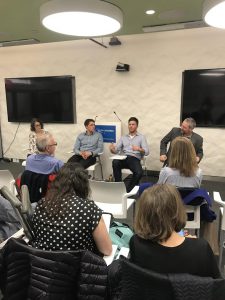 Many professionals have had an idea of starting their own business, either from an early age or due to dissatisfaction with their current work. Whether you want to bring a new idea or service to the world or offer services in an established field, it can be challenging to strike out on your own. To learn how to put the right foot forward while starting one’s own freelancing or entrepreneurial journey, GreenhomeNYC’s March event focused on “Freelancing and Starting Your Own Business.” It saw speakers who are both established and budding entrepreneurs in building software, engineering, solar, and business consulting. Each speaker gave us a glimpse into their professional lives and how entrepreneurship is different than working in a more traditional setting:

Mina has a background in biomedical engineering and was first introduced to energy efficiency when she started working at the Association of Energy Affordability. After having worked for several years in various energy consulting firms, she decided to start out on her own by freelancing as an energy consultant, before starting her own company, Agarabi Engineering.

Mike Brown also holds a degree in Biomedical Engineering. He started his career working for a construction company in the environmental department. He and his brother, who was also working for a big construction firm, noticed that the communication between different departments in a construction firm were poor and people were unsure about the various procedures to be followed while building and maintaining building systems. To address this, they founded LogCheck and with a little help from family and friends saw their company grow within the first year. They also received a grant from NYSERDA, and received some funding through venture capital. The journey however, has not been easy; they started another company prior to this which and failed and Michael claims that it taught them valuable lessons that ultimately contributed to LogCheck’s success.

Gaelen founded Brooklyn Solar Works with his friends two years ago. Having previously worked for solar firms themselves, they saw a business opportunity in Brooklyn for customers who wanted solar, but could not install them due to space constraints. With Solar Works, they worked with an architecture firm to build rooftop solar canopies, rather than installing panels in the traditional way. In a short amount of time, they have managed to make their business profitable and build a workforce of 15 people. Gaelen stresses the need for having partners while starting a business, as the workload can be shared equally.

Gregory holds a degree in Computer Science and has worked for several large software firms as a consultant. After several years in the industry, he founded his own coaching company. He says that both his successes and failures have made him a stronger person—after once losing close to a quarter million dollars in one business venture, he learnt how to pick himself up and learn from his mistakes. He now helps people start their own businesses across all industries.

Each speaker had a few words of advice for aspiring entrepreneurs: