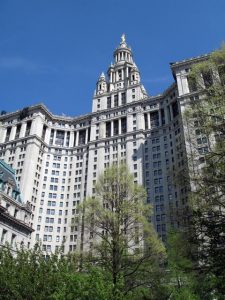 On October 29th, GreenHomeNYC convened a panel discussion on sustainability careers in government, a field that promises change and growth in the new green economy. In New York in particular, breakthrough climate legislation is not just leading the way to a carbon neutral city; as our speakers demonstrated, it is also leading to innovative and meaningful careers.

Since the beginning of 2019, Elizabeth Kelly has been a Senior Policy Advisor to the New York City Mayor’s Office of Sustainability (MOS), which works to “support policy objectives and implement programs.” Most recently, NYC passed the Climate Mobilization Act, a collection of bills created to achieve carbon neutrality in the city, cutting greenhouse gas emissions 40 percent by 2030 and 80 percent by 2050. Elizabeth’s staff focuses on reducing greenhouse gas emissions in the built environment, primarily in implementation. “We’re in the process of launching a multi-million-dollar technical assistance program to help building owners comply with the Climate Mobilization Act.”

On a day-to-day basis, Elizabeth engages with a variety of stakeholders on the new policy. Elizabeth works with everyone from community activism leaders to building operators, from real estate companies to government agencies, including New York State, New York City and other cities around the world.

Before entering government, Elizabeth’s career was in the non-profit world. Originally from Seattle, she moved to New York City and immediately got involved with GreenHomeNYC. Through the connections she made during her volunteer involvement, she found her way to a job at a non-profit bank with a focus on affordable housing. Elizabeth worked there for seven years managing their sustainability initiatives before eventually making her way to the MOS.

Bryan Simpson, a Project Manager at the New York City Department of Citywide Administrative Services (DCAS), Division of Energy Management, is responsible for project development and implementation of energy efficiency capital projects, primarily in energy retrofits. He graduated with an engineering degree, he said, at a time when his university didn’t really have a lot of sustainability classes, let alone sustainable engineering. Times certainly have changed, and the field has responded to the needs of today. Looking back, Bryan recalls avoiding the HVAC class because it looked boring. It turns out it would have been very useful to him today.

Bryan’s first job was an internship at a New York City energy modeling firm, “that was developing software for architects to try and do design for efficient buildings ahead of the curve.” He then worked as an energy auditor in multi-family buildings for about five years, where his passion for the energy efficiency sector piqued. His journey then took him to DCAS.

In his current position, Bryan works in many different types of buildings, from cultural institutions to schools and colleges, and has been involved with many energy savings solutions. He is glad to work for an agency that is responsive to the city’s energy legislation, pointing out that such mandates result in prompt movement and development. “Because of this law, we have a lot of goals that we have to meet, and the opportunity to work in all of these very different types of city buildings [is] very exciting to me.” In particular, Bryan’s job is to help achieve the goals of Local Law 97, the centerpiece of the Climate Mobilization Act, which is designed to effect significant reductions emissions from buildings. The city is still learning how they will meet the lofty goals of Local Law 97, and Bryan is thrilled to be a driving force. 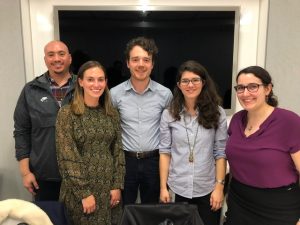 Hannah Doherty has been a Policy Analyst with the New York City Department of Environmental Protection’s (DEP) Integrated Water Management Group for two years. Like Bryan, she believes that “if you’re interested in working in the city, it’s really helpful if you can get work that’s fitted with a major priority of the mayor’s office…because there’s going to be a lot of push behind it.” Hannah’s team creates innovative solutions to the city’s urban water challenges. She identifies innovative pilot projects that combat “issues of storm water management, water conservation, and waste management.” Her group regularly tackles sewer overflows, water quality concerns, and watershed infrastructure updates with brand new cutting-edge projects. She pointed out that while DCAS projects fit well under the mandate from the city’s local laws, her group doesn’t quite fit neatly under a regulatory driver. “That’s been an interesting dynamic of keeping our work moving.”

Hannah graduated with a Bachelor of Arts degree in Environmental Studies and Economics and then went on to receive a Master’s degree in Environmental Management and Water Resources Management soon after. “I was told that…if I really wanted to dive into planning-level water resources management… having a master’s would be pretty critical.” Today she isn’t sure the job merits a master’s degree, but concedes that the credential is necessary to qualify for this kind of job if you don’t have equivalent experience. She added that one thing that surprised her about working in government is how long it actually takes to begin working after you get hired — it took her four months.

For the last three years, Tarek Arafat has been with DCAS as a Program Manager of the Monitoring-based Load Management Program for Energy Management, where he works on a greenhouse gas reduction initiative for hundreds of real-time monitored municipal buildings. “The program I work in is about using energy data that’s near real time to influence HVAC operations.”

Tarek’s career journey was one of education and self-discovery. He began with an undergraduate degree in mechanical engineering and first worked in robotics design. “I studied… robotics in school [and] when I got that first job I thought it was great. I worked on the Mars Rovers… I thought that was pretty fun.” But eventually he felt unfulfilled and was drawn to sustainability because he was looking for something bigger than himself. He cited Al Gore’s film, An Inconvenient Truth: A Global Warning, as a major motivator to go back to school for a graduate degree in sustainability. He then received a second Master’s in Public Administration, with a focus on environmental policy and went back a third time to get another Master of Science degree in public informatics. For a while Tarek did energy audits for private sector buildings but decided that he was yearning to be a part of policy making. Tarek emphasized the importance of his engineering background, explaining that it’s no trivial thing to understand how motors and machinery work when it comes generating and using energy. 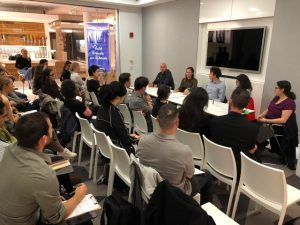 During the question and answer session after the presentations, one participant asked the speakers what type of school program would be the most appropriate for a government job. The answers varied, but one speaker mentioned that it’s important to realize that the school someone chooses isn’t just the name on the diploma. It’s also the place where they engage in networking and participate in internships. While some of these speakers hold degrees from private universities like Columbia and Duke, several pointed to state schools as a strong option, especially for a career in resource management. State schools often offer funding for natural resource programs. And lastly, several speakers recommended taking advantage of the faculty’s knowledge. As Tarek put it, there is “richness in the people who’ve done this before.”

An audience member asked the speakers, “If you could go back in time and be your own mentor, what would you tell yourself to improve your path to success?” Almost all of them responded that keeping up with connections and networking is key. It can even turn out to be more helpful than the actual classes you take in school.

So, how should you make your way to a sustainability career in the government? Clearly, building a professional network is central. Other strategies include obtaining a degree (or several degrees) in the fields of study that truly interest you, starting out volunteering, and gaining experience in a few sectors along the way.

What is government job in sustainability like? According to our speakers, it’s incredibly rewarding to be making a difference in our air and water quality, coming up with innovative ways to make our machines run more efficiently, and being personally responsible for carving out critical new policies that will save our planet. To quote from Elizabeth Kelly’s LinkedIn page, by working in these professions we are “saving ourselves from ourselves.” What greater accomplishment is there?

As always, we are incredibly grateful to Grohe Showroom for hosting us!