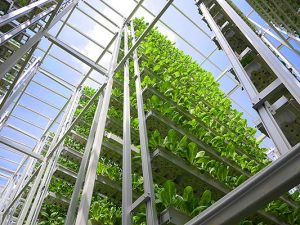 When you think of New York City, what’s the first image that comes to mind? For people who have visited or live here, maybe it’s one of the following – crowded, dense, lights or skyscrapers – but not “green” and certainly not “farming”. However, that picture may change with the advent of urban vertical farming. So what exactly is vertical farming and how is it different from other concepts such as roof top farming, hydroponics or aquaponics?

Vertical farming is the practice of producing food in vertically stacked layers, inclined surfaces or integrated into other structures, using controlled-environment agriculture (CEA) technology where environmental factors such as light, humidity and temperature can be controlled. The concept of vertical farming in NYC was developed about 15 years ago by Dr. Dickson Despommier, a former public health professor at Columbia University, with contributions from his students. In The Vertical Essay, Dr. Despommier cites that the earth’s population will increase by about 3 billion people by 2050. Currently, over 80% of arable land throughout the world is already in use and another 15% is unusable due to poor land management. That means if traditional farming practices continue, there won’t be enough land to grow food for the expanding population. Vertical farming is a means of maximizing space by growing food inside the tall buildings of an urban environment.  In fact, he refers to it as the third green revolution.

In essence, vertical farming is a mix of two different technologies – indoor farming, like greenhouses, and hydroponics. It’s different than a rooftop garden in that rooftop farming doesn’t use much technology at all – it’s simply the growing of crops or plants on a horizontal roof instead of on terra firma. 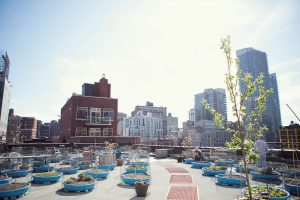 A great example of a successful rooftop farm is right in the heart of Manhattan, blocks away from Times Square. Hell’s Kitchen Roof Top Farm is in season April through September. Produce is donated to a local food pantry, providing the community with much needed fresh greens. Another example is Gotham Greens, a greenhouse built on the rooftop of the Gowanus Canal Whole Foods store. Their model is very technologically savvy, incorporating the use of hydroponics with digitally set temperatures and water usage, similar to a vertical farming system.

Another urban farming concept that often gets confused with vertical farming is aquaponics. In an aquaponics model, fish grow in a closed environment, generating nitrogen-rich waste which is transformed into natural plant fertilizer and used to grow indoor vegetable gardens supported by LED light. Oko Farms in Brooklyn is the most famous example in NYC.

Many vertical farms are designed to be self-sufficient – take advantage of solar energy, natural ventilation and recycling of natural resources.  In cities, a key benefit of vertical farming is the ability to grow food in a limited amount of space. Dr. Despommier cites many other benefits: the immediate access to food in urban areas not only reduces spoilage but also lowers carbon emissions since the produce travels much less distance after harvesting. Another benefit is that this kind of food production is not dependent on growing seasons or affected by severe weather – be it floods, droughts or other natural disasters.

In short, urban vertical farming turns agriculture into a closed system in which “food is grown, transported, eaten and waste disposed of all in the same metropolitan area”. A long-term benefit could be the gradual repair of many of the world’s damaged ecosystems that have till now been used as farmland. 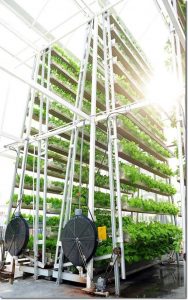 For an island nation like Singapore, resources like water and food have to be imported from outside. In such an environment, with an area of 710 square km and a population of 5 million, vertical farms make a lot of sense. Entrepreneur Jack Ng came to the same conclusion. With the help of Agri-Food and Veterinary Authority (AVA), he founded one of the world’s first commercial vertical farms. Sky Greens is soil based (as opposed to a hydroponic environment), produces one ton of vegetables every other day and is five to ten times more productive than a regular farm. In addition to the high yield, the farm adopts sustainable, green technologies that allow it to have a low carbon footprint. A patented water-pulley system uses gravity and recycled flowing water to rotate the plants so they get an even amount of sunlight throughout the day. Each rotating tower of plants within the building uses the energy equivalent of just one 40-watt bulb.

The biggest vertical farming success story in the New York area is actually right outside the city. AeroFarms was started in the Finger Lakes by a Columbia University engineering graduate, but recently moved to Newark, NJ, where it serves the New York metro area.  Aerofarms use vertically stacked aeroponic beds to grow greens for regional buyers. Aeroponics is very similar in concept to hydroponics, but instead of submerging plants in water in long rows, the plants are grown in vertical arrays and are fed nutrients in mist form.

In Dec 2015, AeroFarms, raised $20 million in venture capital to build new farms that are projected to yield two million pounds of greens annually, making this one of the country’s largest.

Where Do We Grow From Here?

For all its benefits, vertical farming has its critics, who point out that it’s not cost free. Either buildings must be specially built for this purpose or existing buildings require a large number of upgrades and retrofits.  And there are costs associated with the energy requirements for lighting, heating and other vertical farming operations.   But proponents still feel that the overall benefits are huge, particularly in the output per amount of land.  With enough capital investment, vertical farms can be set up in an abandoned warehouse in the center of a city.  “The amount of land it takes to feed just a hundred people is quite intense, whereas in vertical farming you can feed at least ten times as many more in a fraction of the space.”

According to Dr. Despommier, by growing crops indoors under well-monitored conditions, “one acre of vertical farm could be equivalent to as many as ten to twenty traditional soil-based acres.”  And that’s a growing green trend to watch.