There’s something fishy going on in Brooklyn, but in the best way possible!

Despite predictions of snow, several intrepid GreenHomeNYC members made their way to Bushwick last month for a very informative tour of a local aquaponics farm.  Oko Farms was founded by budding entrepreneurs Yemi Amu and Jonathan Boe, in collaboration with the Brooklyn Economic Development Corporation.  It’s currently the largest outdoor aquaponics farm in New York City. 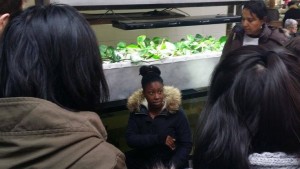 What is aquaponics?  In simplest terms, it’s a method of growing fresh water fish and plants within a closed loop system that generates little or no waste. In the course of the tour conducted by co-founder Amu, it became apparent that this highly sustainable farming method can play a vital role in healthy, nutritious food production.

Although aquaponics was practiced as far back as ancient Egypt, it has come into the limelight recently because of its sustainable focus.  It uses fewer resources, it’s relatively inexpensive and it eliminates the waste and toxic run-off of current aquaculture processes.  Over-fishing of the world’s oceans has depleted fisheries, leading to over-dependence on aquaculture or farm-raised fish.  Unfortunately, too many fish are bred in small spaces contaminated with their own waste, antibiotics and pesticides. 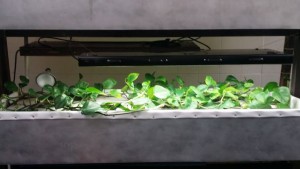 In contrast, aquaponics is based on understanding and utilizing the nitrogen cycle which exists in nature.  Bacteria converts the ammonia in fish waste into nitrates that provide a rich fertilizer for plants. These nitrifying bacteria, which start colonizing at high speeds once ammonia builds up, are critical to the process – without the bacteria, there can be no aquaponics.  Water from the fish tank is pumped into hydroponic beds where plants absorb the nitrogen. The more nitrogen provided by the fish waste, the more green leafy plants are produced, such as lettuce, spinach and arugula.  Other minerals in the water help produce plants such as tomatoes, peppers and bananas.  Once filtered by the plants, the water is returned to the fish tank and can be recycled many times.  In fact, the process uses about 10% of the water needed for aquaculture farming.

One of the main disadvantages of aquaculture is that the fish must be fed many times their weight to grow to a good size for human consumption.  With aquaponics, fish can be fed algae, commercial fish food, worms, insect larvae, vegetable sprouts – almost anything that’s edible. This is a huge advantage for aquaponics practitioners.  Another environmental benefit of aquaponics is that it can potentially help reverse the damage done to our oceans through years of over fishing.

Aquaponics can support many kinds of fish, but tilapia, which is considered one of the most popular farmed fish in the world, is a great starter fish since it can be fed with any kitchen scrap.  Aquaponics has a large and growing presence in the U.S., from Florida to the Mid-West.  And drought-prone countries like Australia have been practicing it for many years.

Aquaponics is the perfect synergy between plant and animal processes – one that eliminates the pollution and health issues that are a by-product of aquaculture, while producing high quality, organically grown fish and vegetables.