Living it up in Tiny Homes

As spring cleaning season concludes, many declutter devotees are likely contemplating, “Could I make do with less?” And, depending on the magnitude of decluttering, “How much space is needed to live a full life?”

Tiny Life is a social movement and seeks to address such issues through lifestyle simplification. Inhabiting smaller, and sometimes mobile, spaces allows many the freedom to prioritize other aspects of life. Living in a smaller structure can free up finances and responsibilities, which in turn, renders greater flexibility in job choice and travel. 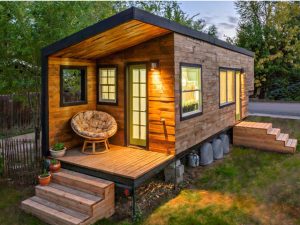 What are Tiny Homes?

Tiny homes can include micro-apartments, trailers, micro-homes, yurts, houseboats, and garages. Simply put, according to the television show, Tiny House Nation, the average home is 2300 square feet and tiny homes are roughly one-tenth that size.

Carpenter and Assistant Organizer of the Meetup, NYC Tiny House Enthusiasts (NYCTHE), Tim Tedesco attests that there are many types of tiny residences. “Living in NYC is tiny living. Most people already live in tiny homes like within a small apartment and bedrooms within a shared space.” He elaborates that residents learn how to create a well-organized, optimally-designed home, in which each and every space has a function.

Members of the NYCTHE vary in levels of experience with Tiny Living, from sheer dreamers to experienced individuals who have successfully built and/or reside in tiny homes. The April meeting brought around 20 NYCTHEs together at Bohemian Hall and Beer Garden in Astoria. Participants share different planning stages through stories, photos, and sketches of the latest ideas. Message board topics range from appraising the value and obtaining the discount code for an upcoming Tumbleweed Workshop in New Jersey to crowdfunding the conversion of a camper into a mobile coffee shop in Brooklyn. Thus, this active community of 321 members not only bonds around the lifestyle, but also creates a local knowledgebase. 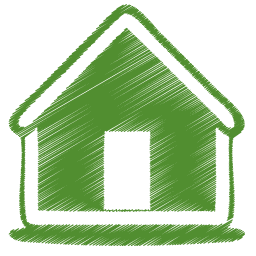 Popular television shows, like Tiny House Nation or TinyHouseBigLiving condense the process of tiny home building to an entertaining and inspiring 30 to 60 minutes of programming. However, if tiny-home-building is a DIY instead of an assemblage of television contractors, gaining awareness of zoning laws, up-front costs, heating, and plumbing is essential.

While living in his self-made tiny home of 150 square feet, Tedesco spent about $10 per month on electricity and used an electric heater in the winter, consuming around $30 per month for heat. Consider that last year the average NYC resident could expect to pay on average a monthly $75 Con Edison electricity bill. Savings like these allowed Tedesco to invest more in small portions of quality, durable materials like hardwood floors and a granite countertop.

In terms of resources, Tedesco recommends that tiny home novices get ideas from the building community through resources like Tiny House People, the Facebook group. Comprised of roughly 27,500 members, this non-commercial social-media group enables interested builders to quickly poll the community on their ideas or plans before investing too much time and effort.

Similarly, documentaries can provide some insight into the effort of tiny living. The documentary, TINY, interviews multiple individuals, couples, and families regarding their decision to move into tiny homes. The film’s central story follows Christopher Smith and his girlfriend (and New Yorker), Merete Mueller, as they build a tiny home in Colorado. While intending to build their tiny home within three months and a limited budget, the film touches on logistical setbacks, up-front finances, and personal values over a year’s worth of construction. Illustrative of the realistic, but also optimistic tone, one interviewee of the film stated that tiny living is “two parts ‘why not?’ and two parts ‘how to?’”

Aside from micro-apartments, the “how to” practicalities of zoning in metropolitan areas are difficult or non-existent. The organization known as the American Tiny House Association exists to “promote the tiny house as a viable, formally acceptable dwelling option for a wide variety of people.” While currently providing guidelines for tiny home construction, the organization provides outlined requirements for creation of American National Standards Institute (ANSI) standards. The requirements along with association insurance and fees for application, auditing, membership could pave a path to ANSI accreditation. 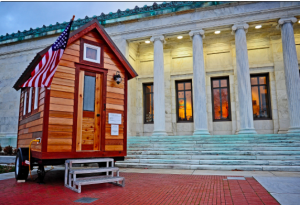 The association also attempts to inform the public on tiny house quality and safety. Though construction itself may not have strict standards, zoning laws, building codes, and RV regulations do exist. The association provides state-specific information including how to register your tiny home on wheels through the DMV. Likewise, it is important for builders to understand the minimum square footage for their residence. For instance, if a township only allows permits for 650 square feet and above, this could dash the dream of constructing a quaint 250-square foot cottage on that land.

State of the art

The cost of a permit plagued Brooklyn artist, Mark A. Reigelmän II, with a recent art installation. Reigelmän was recently featured in Slate for an artistic application of a tiny home. His masterpiece, Smökers, was built to collect steam from manholes and funnel it through a small cabin complete with chimney. The cabin has toured around and has been used in lieu of the traditional orange and white conduits for the city’s steam system excess. Reigelmän was unable to raise the money for a permit and approval. Instead, according to the feature, his plucky crew pragmatically built Smökers to be the car-sized so that it could be parked. This size also prevented the structure from becoming an unnecessarily large roadblock on any city street.

The freedom of living small

Common to Tedesco, Smith, and Reigelmän is the recurring theme of the simplistic beauty of downsizing. While, overcoming conventionally-sized housing is not without its share of struggle, tiny living can redefine personal values through innovation and sustained efforts. As a previous tiny home owner, Tedesco now rents a home in the city, operates his business, and helps others pursue their tiny dreams at the meetup. However, that doesn’t stop him from aspiring to build a 35-square-foot micro-house on wheels for traveling and camping across country with his dog. Thus, finding small ways to live mindfully can usher in a wide-open future.