As business evolves and the solar industry changes, local business owners in New York City face their own set of challenges. In a recent GreenHomeNYC forum, five speakers from different facets of the solar industry explained how they are adapting to changing technology and the needs of city residents.

Gaelen McKee, a former Sunrun employee, noticed an under-served market for solar energy in Brooklyn but was frustrated that potential clients were often disqualified due to the structure of their roof.  Obstructions and lack of pitch angles on flat roofs prevented many installations from moving forward. So he collaborated with a few other industry professionals and founded Brooklyn SolarWorks.

Brooklyn SolarWorks does what no other company wanted to do.  Working almost exclusively with multistory residential buildings, the company developed a canopy system that elevates the panels above the roof structure to avoid wasted space from chimneys, vents, and raised portions of the roof. But engineering the canopy wasn’t the only obstacle. In order to get supplies to the roof, the company needed to invent a scaffolding system and provide a means of maintaining accessibility for the fire department.  Even after these notable achievements, there have still been other hurdles they need to overcome. As solar energy technology advances in the form of high capacity batteries for energy storage, particularly Lithium Ion based batteries, fire departments have voiced concerns about the safety of these products, presenting an implementation challenge across the solar industry.

McKee also spoke about the challenges of permitting, paperwork processing, scheduling and general logistics to get a project completed. The whole process from contract signing to the first day of solar production takes about nine months, in comparison to the four months it takes for a normal residential project.

As the only installer in Brooklyn capable of doing this work, the company has much of the market to itself. Still, Brooklyn SolarWorks has its work cut out for it in trying to keep up with the offerings and speed of the rest of the residential solar market, but McKee remains optimistic as the company approaches its first megawatt of contracted solar production. 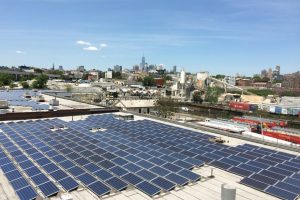 Sourcing energy from renewables is a complicated process. There are a wide variety of options, and the average consumer or building owner may not have the knowledge to weigh each option effectively. By using data insights and vendor project proposals, GridMarket is providing solutions in a way that makes sense to consumers.

Oisin O’Brien, Director of Research and Data Analytics, discussed a case study at Marcus Garvey Village, where GridMarket is delivering free energy to low income housing. This project will subsequently lower the rent to live in the units, and increase the quality of life for inhabitants. GridMarket is doing this by increasing the energy efficiency of the building, developing renewable sourcing, and working with local city entities.

By delivering quantitative, expert knowledge of the field, clients are able to make the best decision for their needs.  GridMarket uses the latest technology and data to develop multifaceted solutions, while working with companies and industry professionals to build maximized systems. This relationship between digital tech and industry involvement is what makes the company so cutting edge. 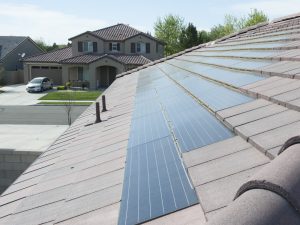 If you’ve kept up with solar industry news, you know that Tesla is trying its hand at infiltrating the market by producing a normal-looking roof shingle that contains photovoltaic cells. This may be a new product, but the concept is far from innovative. Noah Siegel, Business Development Manager at SunTegra, has been in the 4 billion dollar solar industry for three years pushing these types of solar roof products. “Integrated Solar Roofing” is based on the importance of aesthetics. Since some homeowners are dissuaded from solar due to the look of bulky panels on their house, SunTegra found an integrated solar solution that blends the panels seamlessly with normal roofing materials.

The important thing to note here is the overall performance of the system, compared to the expected energy production of Tesla’s solar roof. Solar systems are installed with the goal of producing enough energy to offset the home energy bill. A major concern of industry analysts on the projected performance of Tesla’s roof systems is the heightened cost, without delivering on energy production. SunTegra systems are installed with a large focus on aesthetics without sacrificing energy savings. Hidden wires, a low profile, and reduced installation costs allow for an attractive system that produces the same amount of energy as traditional systems. Siegel argued that Tesla’s shingles don’t compete in the solar market – the true competition lies within the roofing market. 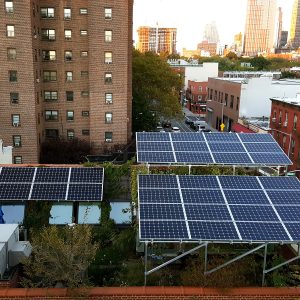 LO3  Energy and the Brooklyn Microgrid

Cities are notorious for high energy use in a concentrated area, which makes them prime candidates for renewable energy solutions. Some of those solutions involve using a microgrid, which can allow residents to buy and sell energy within their local communities. Sasha Santiago and Elena Adcock, both involved in Marketing and Community Engagement for LO3 Energy, discussed how this model is making local, sustainable energy a reality for residents in Gowanus, Park Slope and Boerum Hill in Brooklyn.

The Brooklyn Microgrid project, operated by LO3, pools locally generated renewable power, creating a peer-to-peer energy option that boosts the local economy. Residents who generate excess energy from their solar panels are connected to other residents who either don’t qualify for solar or simply want to buy their energy from a local, renewable source. Consumers are still connected to the traditional power grid, but if service fails due to a natural disaster or other emergency, users can receive their power locally through the microgrid.  That makes this a very appealing and resilient option – consider that during Hurricane Sandy, for example, the Gowanus Canal flooded, knocking out power from ConEd for several weeks.

Local endeavors like this wouldn’t be possible without the high density of large community grids in the area. That number continues to grow, thanks to companies like Brooklyn SolarWorks and city-wide incentives to invest in renewables.