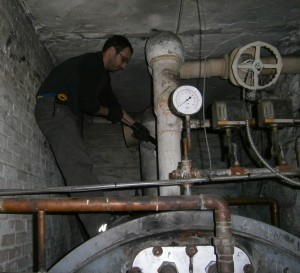 After college I was living in Boston for the summer.  MASSPIRG, the state public interest research group there, was working on a climate change campaign to get Massachusetts to ratify the RGGI Bill.  The Regional Greenhouse Gas Initiative is a carbon cap-and-trade system for the Northeast states.  I helped fundraise for that where I learned about the issue and the politics involved.  It was also the summer that the Al Gore Movie, An Inconvenient Truth, came out.  It was a very hot topic at the time.  The initiative eventually went through in Massachusetts .

Living in New York City, obviously there are a lot of buildings.  I know that buildings are major contributors to greenhouse gas emissions in the city and a lot of the city’s energy use is from buildings.  I thought that would be a great starting point for focusing on being more efficient and more sustainable.

Please describe how you became involved in GreenHomeNYC.

I randomly googled green buildings in NYC and came across GreenHomeNYC.  I shot them an email and went to meetings and met other people that were interested in the topics.  I didn’t know anything about it at all at the time but I started volunteering so that I would learn.  One of my first assignments was to make informational note cards that we would post on the website.  I did one about passive houses.  I researched passive houses, passive lighting, and passive heating systems.  This was a good way to learn about one aspect of green building and now it’s a pretty hot topic everywhere.  It was cool, a good way to get my feet wet.

How do you feel GreenHomeNYC has impacted/has the potential to impact New York City and the broader public? What does the organization mean to you?

I think that GreenHomeNYC provides a way for folks to get very unbiased information about green buildings and urban sustainability topics in general.  The members, whom are mostly professionals in the field, shape the view.  I think you get a very practical and informed viewpoint about sustainability and green buildings in the city.  Personally GreenHomeNYC has been a great resource for networking, contacts and getting involved in the industry.  Through a lot of the events I’ve met key people in various fields within green building in the city.  It also got me at least one job, possibly two jobs I was interested in.  GreenHomeNYC  provides a slew of information and is a great resource for getting more information when I need it.

As leader of the SustaiNYC tours, how do you think the tours promote GreenHomeNYC’s goals?

The tours offer guests, as well as volunteers, opportunities to see first-hand green buildings in practice.  You can see a lot of what we talk about at the forums, what’s posted on our website and the information that is discussed at the NESEA conferences in person.  Even better you can hear the stories of the development from somebody who is intimately involved in the project.  I think that is a great experience for folks who are already in the field, looking to get into the field, or just interested. I think that the tours also promote GreenHomeNYC’s goals because they build up our network and folks can go on the tours and become inspired by those who are out there in the field.  It’s also really neat because we’ve had some tour guides give multiple tours of buildings over the years.  Some have done almost ten tours now and we’ve seen three or four buildings from one developer.  You can see a progressive trend in a lot of there work. 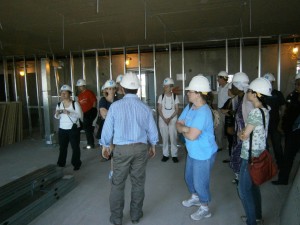 Please reflect on the most recent tours (May 18)?

With the most recent tours we were striving for not just buildings, but a lot of the different aspects of the mayor’s PlaNYC strategy.  We wanted to explore practices such as waste management, storm water management, and urban agriculture.  The tours were still building-centric but each building highlighted a different strategy for tackling those issues.

We had a building downtown that focused on storm water management and reuse.  It had a full in-house water treatment facility in the basement.  The Lower East Side Ecology Center demonstrated reducing our waste as a city by averting large waste streams and turning it into something productive like compost.  At 424 Melrose Street we looked at the Passive House, a more aggressive form of energy efficiency.  It’s a very exciting time to be developing in the city and the tours are able to highlight some of the cutting-edge innovation.

When I first started at GreenHomeNYC, the tours would focus on LEED certified buildings, and green materials like bamboo floors and recycled content countertops.  It’s very interesting but I think we’re now looking at more intricate projects like hydroponic greenhouse roofs. We went to see a building in the Bronx, Arbor House, that had a hydroponic farm on the roof.  We have a whole city of millions of buildings and square feet of interior space. Nobody’s really utilized the roof until now. Green roofs and landscaping were essentially the first steps and now we’re starting to see that we can combine areas, such as food production and distribution with unused building space.

How do you plan to move forward with the program?

We would like to continue this theme of urban sustainability and what the next iteration of New York City is going to look like.  The developers that are giving the tours now are going to have new projects in a year or two and will be pushing their envelopes.  We’re also going to start doing one-off tours of buildings throughout the city and be more aggressive with buildings that we can see.  So far we have the New York Times building planned for July.  We’re going to try to get some big-name buildings for these one-off tours.  We want to tour the Hearst Tower, which has been the white whale of the GreenHomeNYC tours.  We also want to look at greening schools.  I talked to some folks at The New York Harbor School on Governors Island.  Some of what they are doing would make a terrific tour and I think we might be doing something with them in the fall.

We always want to be looking at those buildings and designs that are pushing the envelope in all areas of sustainability, not just energy efficiency, which is awesome, but there’s also water management, waste management, and transportation would be an interesting one to get into.

Any other details that you would like to include.