Imagine a city with clean air, solar energy, plenty of pedestrian spaces and no cars. It’s not at all far-off; these are all on the agenda for New York City in coming years. In fact, some of the projects are already in progress. The Northeast Sustainable Energy Association held their annual Building Energy NYC conference on November 3, bringing together leaders in energy, building maintenance, real estate, policy, product, and new technologies. Many topics were discussed, but three of the main takeaways were long term planning, regional-district planning, and enhanced resiliency for the city of New York.

In a talk by Jenna Tatum, Kate Gouin, Benjamin Mandel and John Lee from the NYC Mayor’s Office of Sustainability, the focus was on 80×50, the de Blasio administration’s commitment to reduce GHG emissions 80% from 2005 levels by 2050 (80×50). NYC’s Sustainability 80X50 plan states, “It is the level the UN projects is necessary to avert the most disastrous impacts of climate change.” The plan is essentially a roadmap that is broken into four areas of focus: Buildings, Energy Supply, Waste, and Transportation, with comprehensive reporting and modeling done for each category. Following are the four main takeaways of the plan’s goals in each sector.

Jenna Tatum, Senior Policy Advisor, spoke on buildings within the 80X50 plan. Findings from energy benchmarking data and energy audit data included in the 80X50 report indicated the majority of GHG emissions come from space heating and domestic hot water production in buildings. All buildings will need to be retrofitted to achieve the goal by 2050, however, even if every building owner implemented the suggested energy reductions, there would only be a 33% decrease by 2050 – which is not enough. Other forms of renewable energy have to be used to achieve a 40-60% reduction and meet the 80×50 goal. All buildings will have to undergo deep energy retrofits. Some of the strategies outlined were the use of a new standard, such as Passive House, for all buildings moving forward, continued education among building owners and managers, and empowering residents with new tools to reduce energy consumption. Also, buildings will have to incorporate some sort of solar and transition to renewables in years to come.

Benjamin Mandel, Renewable Energy Policy Advisor, spoke about what is needed for the city’s energy supply in order to achieve 80×50; namely, a low carbon grid and a 70% renewable energy mix from within and beyond city boundaries. He explained that NYC’s energy supply mix is made up of 41% in-city facilities; the goal is to reduce reliance on them and move to more efficient transmission from sources outside the city. Mandel believes investment in a large-scale renewable energy resources, like a smart grid supplying energy to the city, is essential. There is a projected 1000MW goal for solar within the city and 100MGW hours for battery storage in coming years. The plan highlights using solar and wind as bulk resources in future years. He projects that utility solar and wind farms from upstate New York and Long Island are needed to achieve the goal. 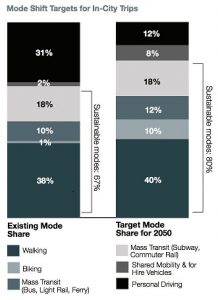 Mandel continued the discussion on the city’s goal for transportation. The main objective is to have fewer single occupant vehicles and transition to more sustainable modes of transportation, such as walking, biking, and public transit. Strategies to achieve the goal for 80% mode-share by 2050 include improvements in city transit systems, making biking and walking safer, and encouraging the use of low carbon fuels where electric vehicles are not an option. He said the city will need to purchase and create infrastructure for electric vehicles, scale up on renewable gases in transport, improve networks of freight-maritime, and leverage tech and data to reduce congestion.

Waste is the smallest sector for greenhouse gas emissions. The majority of GHG emissions are from methane, at 78% through decomposition and 22% from wastewater treatment. According to Kate Goiun, of the Mayor’s Department of Sustainability, New York has targeted zero waste diversion by 2030, a goal she described as “extremely aggressive”. The city’s strategies are to reduce waste, recycle organics, and divert waste from landfills. Programs such as NYC’s GreeNYC campaign promote paper and plastic bag recycling, while other programs include zero waste in NYC schools, creating a market for second use goods, and working with restaurants to recycle organics.

Next was a talk about New York City’s participation in 2030 Districts, featuring Haym Gross of the NYC 2030 District Program, Rory Christian from the Environmental Defense Fund, Brian Geller of Citi Bank, and Frank Maricic from Energy Management Systems. 2030 Districts is a national public-private partnership to reduce building energy use, water consumption, and transportation emissions in designated urban areas.   The initiative has 14 participating cities from Stamford to Seattle to Toronto, and includes building owners, developers, and public-private partnerships working together to reduce GHG levels. What’s special about the program are the toolkits that provide proper education and material to building management and owners, as well as resources for district formation, member resources, and small buildings. Multifamily housing, commercial, educational, and waterfront make up the mix.

In New York City, the first region targeted for participation is downtown Brooklyn, and Clinton Hill Co-ops is the first development to be involved. The second targeted region will be lower Manhattan. Frank Maricic and Rory Christian note, “The biggest challenge of achieving this goal will be working with building owners. It is not cost effective for all building owners to adopt these technologies. They alone do not have such long term planning with their organizations for cost savings.” But by joining the 2030 District, property owners get resources and incentives to achieve a collective goal.

In a panel discussion about resiliency and risk mitigation within the city, Cameron Thompson from Arup noted, “It is predicted that there could be a Super Storm Sandy every 20 years due to climate change.” Panelist Michael Bosco, from Jones Lange La Salle, spoke about JLL’s Building Emergency Assessment (BEMA), a program focused on incident management and reporting. The program benefits JLL’s clients, which include large banks that have a need to implement long-term strategies by developing a critical systems approach.

Joy Sinderbrand, from the New York Housing Authority, spoke about NYCHA’s goals for sustainability. The Office of Resiliency and Recovery was created after Super Storm Sandy to help recover from the storm. Some of its goals include building reinforcement, surge protection, and infrastructure upgrade. An example of NYCHA’s efforts to mitigate the risk of flooding is the development of “lily pad” designs. These are essentially areas of refuge – surface areas raised above flood elevation within a housing development to protect residents from storm surge.

Lastly, Kate Boicourt, from Waterfront Alliance, discussed her organization’s goal to provide public access to our waterways, as well as resiliency, education, and ecological protection. Waterfront Alliance has developed a voluntary rating system, similar to LEED, to meet the sustainability needs of the NYC waterfront. It is a point rating system with categories such as site selection-planning and public access.

All of the talks were focused on innovation, proper education, and cooperation to meet the program’s future goals. Many noted the biggest challenges would be regulatory, social, and financial changes in years to come. The overall mission of the programs will stay the same – focusing on making New York City a more environmentally sustainable city with enhanced economic and health benefits for all.