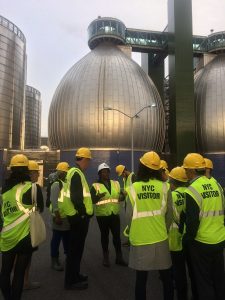 Have you ever wondered what happens to the water you use after washing the dishes, taking a shower, or flushing the toilet? GreenHomeNYC visited the Newtown Creek Wastewater Treatment Plant in Greenpoint, Brooklyn to learn how the NYC Department of Environmental Protection (DEP) sustainably handles wastewater treatment. Our tour was led by LaToya Anderson, the Science and Environmental Protection Educator for the NYC DEP.   As the largest of NYC’s 14 wastewater treatment facilities, Newtown Creek handles an impressive 310 million gallons of wastewater every day, and up to 620 million on a rainy day.  As we approached the site, the first thing we noticed were the glistening, futuristic digester “eggs”. Since 2010, these alien-esque digesters have become an iconic piece of the Brooklyn cityscape, especially when illuminated with bright blue LEDs in the evening.   Anaerobic Digestion Inside the digesters, a biological process called “anaerobic digestion” takes place.  Bacteria breaks down “sludge”, the organic material removed from our sewage. For this process to take place, the digesters are kept at 98°F and are completely sealed to create an oxygen-free environment. In total, these digesters can hold 24 million gallons of sludge at any given time.   END_OF_DOCUMENT_TOKEN_TO_BE_REPLACED
Tags: anaerobic digestion, biogas, efficiency, Green Infrastructure, Green Roofs, Newtown Creek, stormwater, sustainability, urban infrastructure, wastewater treatment, water 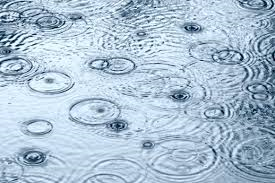 Anyone following the climate change debate is acutely aware of a few facts – the rising temperature of our earth, melting glaciers around the world, the lack of urgency to take action on the part of most world leaders, and last but not the least, the alarming depletion of water resources.  According to the United Nations, “Water scarcity affects more than 40 per cent of the global population and is projected to rise. It is estimated that 783 million people do not have access to clean water and over 1.7 billion people are currently living in river basins where water use exceeds recharge.”   But people who know these facts also know that we can still solve our climate change problems, and that in most cases, it’s not a matter of scarcity but a matter of good management. According to the World Water Council, “there is a water crisis today. But the crisis is not about having too little water to satisfy our needs. It is a crisis of managing water so badly that billions of people – and the environment – suffer badly.” END_OF_DOCUMENT_TOKEN_TO_BE_REPLACED
Tags: Climate Change, rainwater harvesting, stormwater, sustainability, water 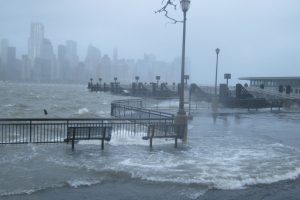 In 2012, Superstorm Sandy was a wake-up call to New York City, signaling that the demands of a changing climate are the “new normal,” and the city needs all hands on deck to mitigate the damage of future storms.  Although much of the damage caused by flooding events occur during storms, sea level rise is very much a wildcard; higher water levels stack with coastal flooding, increasing the amount of damage that may result.   How much sea level rise can we expect in the next century? Nobody can say for certain how much global sea level rise we can expect in the next century. Changing sea levels are caused by two main factors: the melting of continental glaciers (most significantly in Greenland and Antarctica), and thermal expansion.  Warmer objects expand, and a warmer climate means that our oceans will physically expand in size. END_OF_DOCUMENT_TOKEN_TO_BE_REPLACED
Tags: Climate Change, sea level rise, stormwater, sustainability, sustainable design, water 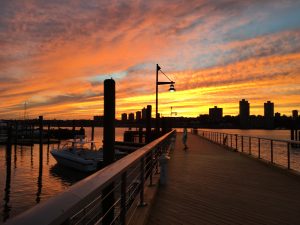 On January 10, GreenHomeNYC hosted three professionals in the field of resilience and stormwater management at the offices of the Community Preservation Corporation, which itself has done significant post-Sandy recovery work in some of the most vulnerable and heavily impacted communities. This Sustainable Career Tracks event attracted a diverse crowd eager to get career advice from our panel of experts.   Mark Ginsberg, Principal at Curtis + Ginsberg Architects, LLP Mark Ginsberg is a familiar face in the resilience community, having spoken on several previous panels about the work his firm has done with new construction and renovations on buildings in the flood plain. Mark is also co-author of Enterprise’s manual Ready to Respond, Strategies for Multifamily Building Resilience, which seeks to give information to owners of multifamily buildings on how to protect their properties and residents in case of an emergency.  He spoke about the Arverne East project that his firm has designed in the Rockaways, an area in the flood plain that has endured heavy damage during Superstorm Sandy. END_OF_DOCUMENT_TOKEN_TO_BE_REPLACED
Tags: career transitions, careers transition, green careers, Green Careers Transitions, Jobs, stormwater 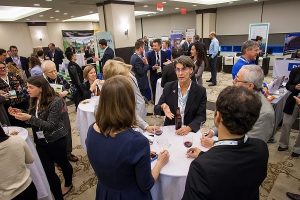 Imagine a city with clean air, solar energy, plenty of pedestrian spaces and no cars. It’s not at all far-off; these are all on the agenda for New York City in coming years. In fact, some of the projects are already in progress. The Northeast Sustainable Energy Association held their annual Building Energy NYC conference on November 3, bringing together leaders in energy, building maintenance, real estate, policy, product, and new technologies. Many topics were discussed, but three of the main takeaways were long term planning, regional-district planning, and enhanced resiliency for the city of New York.   In a talk by Jenna Tatum, Kate Gouin, Benjamin Mandel and John Lee from the NYC Mayor’s Office of Sustainability, the focus was on 80×50, the de Blasio administration’s commitment to reduce GHG emissions 80% from 2005 levels by 2050 (80×50). NYC’s Sustainability 80X50 plan states, “It is the level the UN projects is necessary to avert the most disastrous impacts of climate change.” The plan is essentially a roadmap that is broken into four areas of focus: Buildings, Energy Supply, Waste, and Transportation, with comprehensive reporting and modeling done for each category. Following are the four main takeaways of the plan’s goals in each sector. END_OF_DOCUMENT_TOKEN_TO_BE_REPLACED
Tags: 2030 districts, 80x50, BE NYC, Brooklyn, building performance, BuildingEnergy NYC, Climate Change, efficiency, energy audit, Energy Efficiency, Green Building, Green Power + Alternative Energy, greenhouse gas emissions, NESEA, Policy, recycling, renewable energy, retrofit, solar, stormwater, sustainability, zero waste 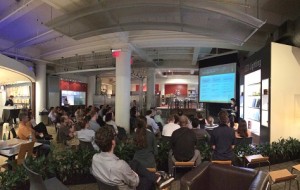 by Shari Baitcher   In New York, a city with one of the highest population densities in the U.S., every 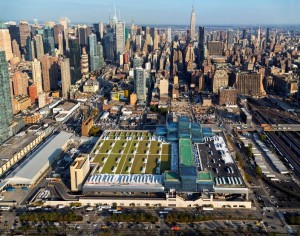 square foot is valuable. In recent years more thought has been given to the space on top of buildings. With 840,000 square feet of exhibition space occupying 6 city blocks, the Jacob K. Javits Convention Center has recently introduced the second largest green roof in the United States.   Rick Brown, Chief Engineer for the Javits Center, exuded passion for the recently implemented sustainability project as he took GreenHomeNYC volunteers and community members behind the scenes of the convention center. We stopped at the IT office where he explained how they capture the heat generated by the computers and servers to help offset the building’s heating demand. Sensors have been installed all over the building to monitor efficiency, revealing a 26% reduction in energy consumption since the renovations have been completed. Additionally, water consumption has been reduced by 2.9 million gallons.  Efficiency measures such as these contribute towards the Javits Center’s goal of earning LEED Silver certification. END_OF_DOCUMENT_TOKEN_TO_BE_REPLACED
Tags: building performance, Energy Efficiency, Green Building, Green Building Tour, green roof, stormwater, sustainable design 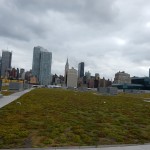 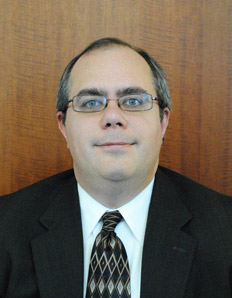 What did your life look like before you started Green Environmental Associates? Prior to deciding to work for myself, I was doing site civil engineering for commercial developers, projects like big box retail and mega subdivisions.  My work has always revolved around design and engineering in land development.  This type of work requires the ability to balance hardcore science and site specific conditions in the field with fuzzier disciplines, like urban planning theory, construction tolerance, and environmental concerns. Describe your “Eureka!” moment that shaped your decision to start your own company. To make a real impact, I believe that a professional must really understand the existing approach to development and work to change that approach from the inside the system.  However, that desire for change must be integrated into the mission of the company.  I met my business partners while working on a corporate advisory board and we found that common ground.  So we started Green Environmental Associates to reflect a mission of bringing change from the inside. We’re not just consultants, but partners in shaping our client’s future. END_OF_DOCUMENT_TOKEN_TO_BE_REPLACED
Tags: Building Code, career transitions, DEP, engineering, entrepreneurship, green careers, interview, Rainwater, stormwater