Mold was another concern.  The basement doors and the top floor doors leading to the roof were left open to keep humidity in the 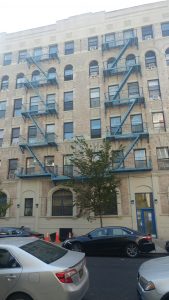 basement low enough to prevent mold – a tactic that proved successful.  After the flood waters receded, none of the gypsum board in the basement needed replacement.

The flood water stayed in the building for three days, and left the building without electricity and heat until repairs were made. To protect against future flooding events, the hydronic boiler system was moved from the basement to the roof.  This move has an added benefit; the much shorter chimney pulls almost no cold air through the boiler when it’s hot but not firing, reducing annual fuel use by an estimated 30-40%.

Due to space constraints, not all of the electrical equipment could be relocated above the flood level. The building’s main electrical switch was replaced with a stainless steel model with holes drilled into it, to allow it to allow for drainage after a flood. Only the most water-sensitive electrical equipment, meters and circuit breakers, were moved up to the first floor.

Special thanks to Henry Gifford for his time, and to everyone who came out to support the progress of green building in NYC.