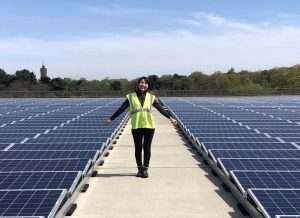 Seven seems to be an auspicious number for Zaira Akhmedova. Her professional journey spanned seven years as she made her way from a degree in finance and accounting to her current position as Financial Strategy Manager at EnterSolar, one of the largest commercial solar developers in the U.S. And it was her trip around the world—a seven-month sabbatical from work—that solidified her commitment to a career in renewable energy.   During her seven-year career journey, Zaira worked as a financial analyst at GE and JPMorgan (JPM) and as a management consultant at Ernst and Young (EY), picking up a CPA along the way. While she always knew she wanted to ultimately be a financial analyst and strategist, her move into renewables was a bit more serendipitous. After a year at JPMorgan, she had the opportunity to join their Global Real Estate Group, just as the Renewable Energy team was forming. “Before that exposure I didn’t know much about what renewable energy was,” she said. But that didn’t stop her from developing a financial model to help evaluate the company’s investments in renewables. She also learned that getting from evaluation to implementation at a company as big and structured as JPM could be a slow passage, and she was ready for a faster pace.     What better way to kick that off than a whirlwind trip around the globe? During her travels, Zaira was struck by “by all the fascinating ways other countries are leading the charge in deploying renewable energy sources and, frankly, confounded by how behind our country is is in renewables. I’d just be driving down the road in the South Island of New Zealand and I’d  see solar farms and wind farms everywhere.” Also on her itinerary was a stop in Bali, where she taught clean energy and English to kids. By then, she was hooked. 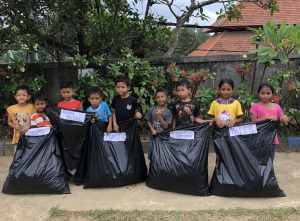 “It really opened my eyes to how fast the world was transitioning from brown power to clean power and I wanted to be part of that,” Zaira said. She became certain she wanted to work at “the core” of renewable energy, at a place where she could contribute ideas and strategy that would literally see the light of day soon after. “At JPM, we had go through so many chains of approval. At EnterSolar, you can use your passion and see impact more quickly. I love that.” Still  jet-lagged from two months in New Zealand, Zaira landed her job at a EnterSolar within two weeks. (Is two another suspicious number?)   The truth is Zaira actually took her time getting to EnterSolar, gradually homing in on her focus, and collecting credentials and contacts along the way. In fact, it was a connection she’d made at JPM who referred her to EnterSolar. It’s no wonder networking is at the top of of Zaira’s career development list. She also recommends taking advantage of an opportunity “even if it’s not exactly what you want to do. Once you get in that first door, more doors will start opening up.” At EnterSolar, she’s been working with senior leadership and the management team on a process improvement initiative. “The EY experience made it possible to recognize that opportunity. It wasn’t originally part of my job description.”    In all its variety, Zaira’s current position represents the sum total of all her previous experiences. She draws daily on what she learned as a financial  analyst—“to synthesize data in a way that is not only understood by management but also tells the story.” As a CPA, she learned how to communicate in a kind of second language, enabling her to “articulate how operations and strategic plans translate into financial performance.” Her big company experience enabled her to introduce important protocols at EnterSolar and to have patience as the company and its staff adapted to this new way of working. “Getting people’s buy-in was the biggest challenge. But I also had be okay with the lack of structure and be patient.”  She credits the persuasion and people skills she’d picked up in her previous positions for steering her through that.    Zaira has a lot more stories and strategies to share about her a career in sustainable finance. Join her and other financial professionals at our GreenHomeNYC Careers online event on August 11. For more details and to register, click here.