There has been considerable activity on the policy and regulatory front on every level – Federal, State, and City.  This is excellent news for green building owners and advocates.  This briefing aims to be just that – a concise look into a breadth of movement in fall 2009. 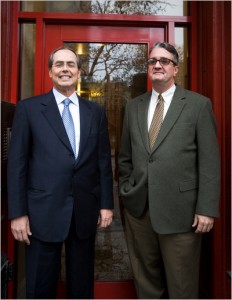 But first, the New York Times ran a piece this week on the Community Preservation Corporation and GHNYC’s very own Andrew Padian.  It cover’s the CPC’s new “green financing initiative” that offers mortgages or refinancing to landlords who fix inefficient energy and water systems in their buildings.  The CPC projects that saving will be large enough for owners to cover the loan, and then some.  The piece gets into detail on some strategies of older, inefficient buildings.  Check it out.

According to the American Planning Association, Sen. Lindsey Graham (R-S.C.) has been willing to work with Sen. John Kerry (D-Mass.) by drafting aspects that may attract moderates’ support.  Alas, further changes and cuts can and will be made to the bill as it is debated on the Senate floor.  Should it pass, it would then have to be reconciled with the American Clean Energy and Security Act passed by the House earlier this year.

Federal Government – Cash for Caulking
This week the New York Times noted a discussion taking place in the White House of a “cash for caulkers” program – a stimulus program for home weatherization.

As noted in the piece, John Doerr, a venture capitalist, and Bill Clinton have offered versions of the idea.  Doerr’s would give households money to pay for weatherization projects, costing $23 billion over two years doled out in incentive payments of about $2,000 to $4,000 per project.  Homeowners would pay at least 50% of the total project cost.  The Clinton plan would utilize unspent clean energy funds from stimulus bill to cover residential, commercial, and industrial buildings.  The Clinton plan would also let the project’s cost be added to the long-ter property tax bill, “effectively splitting the cost with the next owner” should there be fears of selling the property before the project paid-off.

The beauty of such a stimulus approach is not only putting money to back the administrations climate change goals, but the job creation possibilities.

NYS Government – PACE Enabling Legislation
As the New York State Senate stays in Albany to deal with unfinished business (read any of the political blogs for updates), they have joined the Assembly in passing legislation to allow for Property Assessed Clean Energy (PACE) loan programs.  New York’s municipalities can now leverage federal funds to provide loans to commercial and residential property owners to finance energy efficiency retrofits and renewable energy systems.  Borrowers can then pay for the improvements over 15-20 years through an annual assessment on their annual property taxes.  Thus upfront costs are eliminated, property owners see positive cash flow in the first year from their retrofits, and the repayment period is extended.  Annual energy savings can often exceed the property tax surcharge.

The PACE finance industry began in California in 2008 through enabling legislation, and has spread throughout the country since then.  The effort’s advocacy organization, PACENow is a good place to start to learn more about this process.  We’ll continue to monitor the implementation of this major development.

NYC Government – 30 Point Plan for the Green Economy
At the end of October, Mayor Bloomberg announced 30 initiatives to grow the City’s green economy.  Part of the Administration’s Five Borough Economic Opportunity Plan, the initiatives build upon PlaNYC and will receive $7.5 million in funding.  The plan results from collaborations with a reported “more than 20 agencies, conducted 145 stakeholder interviews, and consulted with numerous experts from across the industry to determine the scope of the City’s green sector.”

The initiatives fall into five categories – Green Buildings (to drive demand through regulation), On-Site Renewable Energy (incentives to encourage use), Carbon Trading and Finance (steps to support the  marketplace), Greener Neighborhoods (zoning), and “Creating a Supportive Environment for the Green Economy” (resource sharing and training).  Seven are in the Green Building category (the responsible agency is listed):

The NYCEDC’s website also has an overview of the plan.  Let’s hope these initiatives stay on track now that the elections are over.

NYC Government – Municipal Elections
Speaking of which, Capalino and Company put together a concise listing of the incoming and incumbent elected officials in NYC.

Other
A Booz Allen Hamilton study released by the USGBC at Greenbuild 2009 predicts that green building will support or create 7.9 million jobs between 2009-2013 and will contribute $554 billion to the U.S. gross domestic product.  You can download the report here.

Lastly, some bad news – the popularity of solar incentive programs have led to utilities cutting back on their outlays – even in New York.  Do some research and make sure that a program you’re invested in hasn’t been impacted.

There is indeed a lot happening.  Let’s hope this momentum continues through next year.