tty Noonan Memorial Forum on Policy addressed concerns over proposed policy changes made by the current White House administration to undermine ongoing sustainability initiatives. Drawing inspiration from the legacy of founding GreenHomeNYC member Patty Noonan, Andy Padian, President, PadianNYC Consulting, joined Marcia Bystryn, President, NY League of Conservation Voters, and Charles Komanoff, Director, Carbon Tax Center/Komanoff Energy Associates, to share past experiences and to offer insight into how to be an affective environmental advocate.   THIS IS WHAT AN ADVOCATE LOOKS LIKE It was 14 years ago that a group of 30 affordable homes in the South Bronx became the first of their kind in New York State to be built to Energy Star standards. Compared to typical affordable housing in the area, the project cost $1.36 more per ft2 and used one-fifth the energy. Today, all affordable housing is built to similar standards, but we didn’t get there without a fight. “This was thought of as completely berserk,” said Andy Padian. “[The developer] wouldn’t have done it without Patty kicking really hard.”   To provide some historical context, Padian recalled the mood among his colleagues at Mayor Ed Koch’s Energy Office when President Reagan was elected. “We were horrifically depressed.” Yet despite the President zeroing out both weatherization funding and the Home Energy Assistance Program in every budget, he encountered push back from a variety of groups who worked together to voice their opposition. As a result, funding for these programs actually increased under Reagan. When NY Representative Bill Green opposed federal solar and conservation tax credits because his low-income constituents failed to take advantage, Padian called Green’s Legislative Assistant on Housing and Energy and explained how these credits could be useful. Much to Reagan’s disappointment, Green was persuaded to change his vote. “This is what advocacy is about,” Padian said. END_OF_DOCUMENT_TOKEN_TO_BE_REPLACED
Tags: carbon tax, clean power, energy, environmental advocacy, Monthly Forum, Policy, Tax incentives

The Green Spotlight on BE NYC: Christopher Diamond

Countdown to BE NYC! With only

days until the conference, GreenHomeNYC is shining the spotlight on the experts who will be making BE NYC an exceptional industry event!   One of the professionals participating in the conference is Christopher Diamond.

Chris is Director of Engineering and Technical Analysis at the New York City Energy Efficiency Corporation (NYCEEC), an independent, non-profit financial corporation established by New York City to assist the City in implementing its Greener, Greater Buildings Plan and to advance the goals of PlaNYC.  NYCEEC’s mission is to support the City’s energy and climate action goals by catalyzing an energy efficiency retrofit financing market for private building owners.   Chris earned a Bachelor of Engineering (Civil) from Manhattan College, and Master of Science (Engineering) and Master of Architecture degrees from UC Berkeley.  He will be one of seven industry professionals participating in the panel “Real Financing, Real Quick (Financing for People with Short Attention Spans),” which is part of BE NYC’s Multifamily track.   How did you become involved in this aspect of sustainability? My career path seems a bit scattered, but there is a progression and along the way I’ve learned a variety of skills and perspectives that influence the work I do today.  I started as a civil engineer designing gas stations in Southern California.  Much of that work was tied to then-new environmental regulations including Title 24.  Since the projects were small and quick paced, by the time I got to architecture school I had built more projects than most of my professors.  After graduate school I worked for a boutique structural engineering firm on some high-profile projects, including Simmons Hall at MIT, the expansion to MoMA, and the Nelson Atkins Museum in Kansas City.  I then transitioned my career toward sustainability and energy efficiency and worked at an architectural firm and later Steven Winter Associates.  The work I do today is integrating energy efficiency design and construction into the financing process.  The breadth of my previous experience helps me clearly see the big picture.   What are the main reasons that your panel at BE NYC, “Real Quick (Financing for People With Short Attention Spans),” is important to someone trying to gain a better understanding of the sustainability field at large? The excuse not to do an energy efficiency retrofit—even one with a great payback—is often a lack of financing. NYCEEC was established to eliminate that excuse and catalyze a financing market for energy efficiency.  Financing can be very specific to the type of project under consideration and oftentimes people don’t know what is available.  The format and collection of speakers on this panel will give the audience a great overview of the types of financing available for different types of projects.  Spoiler Alert:  In the end, if there’s a project that doesn’t fit into any of the categories we discuss, people should come talk to NYCEEC.   Can you mention one or two projects you’ve been involved with at NYCEEC that are pertinent to this panel discussion? I’ve worked on two mortgage products in particular.  The first is with the NYC Housing Development Corporation (so it’s limited to affordable housing).  Over the summer we closed our first deal—with Franklin Plaza Apartments, a Mitchell Lama cooperative in Harlem—that is providing additional loan proceeds to incorporate energy efficiency into major renovations that were already planned.  We’ve even been able to leverage a separate loan to do extra energy efficiency measures.  The energy savings of these measures will go a long way to keeping the units more affordable for a long time into the future.

The second mortgage product is now rolling out with Fannie Mae.  We’re working with some of their partner lenders to provide additional loan proceeds for energy efficiency improvements at the time of acquisition, refinancing, or even as a supplemental loan on top of an existing Fannie Mae mortgage.  We’re fundamentally changing the way Fannie Mae underwrites loans:  A portion of the projected energy and water cost savings can be used during the underwriting process.

What other discussions at the BE NYC conference are you most interested in attending? The ones pertaining to resilience. The steps we’re taking with energy efficiency will only reduce the changes to our climate.  Over the course of my lifetime and my children’s, we’ll need to learn to adapt and be resilient as well.   Interested in learning more from Christopher Diamond? Look for him at the Multifamily Track at BE NYC.

Next Month – BuildingEnergy NYC 13 at the Marriott Marquis

GreenHomeNYC and the Northeast Sustainable Energy Association (NESEA) are teaming up once again to present BuildingEnergy NYC (BE NYC 13) on October 15-16, 2013 at the Marriott Marquis Hotel in midtown Manhattan.   BE NYC 13 is a must-attend conference for building owners, managers, financiers, contractors and policymakers with a keen interest in making urban structures more sustainable, efficient, and better able to withstand natural disasters.   Co-presented by GreenHomeNYC and NESEA, BE NYC 13 will offer 24 fully-accredited sessions and a high-level trade show at the Marriott Marquis (10/16) and five pre-conference workshops at host sites nearby (10/15). Topics include economics of solar for building owners, water conservation, building code, lessons from Hurricane Sandy and more.   Come for the content and connections, leave equipped and inspired for a sustainable future.   To learn more about BE NYC 13 check our conference page. Be sure to keep an eye on the GreenHomeNYC Blog for expanded coverage of the conference in the weeks to come.
Tags: BE NYC, BuildingEnergy NYC, Conference, Finance, green careers, NESEA, solar, Tax incentives

Lots to report in the beginning of the new year from the Washington.  The change in Congress has the White House changing its approach to encouraging energy efficiency and regulating greenhouses gases.  In some cases the commitment to efficiency has been reaffirmed, in other cases it is not so clear.  Throughout, however, is the reality of a new Congress that does not have the same interest in putting tax money up to incentivize energy efficiency.  After the jump is information on the new Better Buildings Initiative, changes in policy making bodies and staff departures on the executive level, and the growing influence of the oil and gas industries in the effort to regulate greenhouse gases. 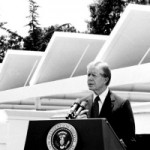 Early this month, outgoing Governor Paterson released the New York State Climate Action Plan.   This plan moves forward on the 2009 Executive Order requiring the state to reduce greenhouse gas emissions by 80% (compared to 1990 levels) by 2050 and established a Climate Action Council to determine how to meet the goal.   The Council will continue to further refine these strategy proposals in 2011.  The public can comment on the plan until February 7, 2011.

As pointed out in the New York Times article about the report,  there has been controversy in the last few months of the administration’s tenure amidst incredible budget shortfalls related to funding cuts and the dismissal of the Department of Environmental Conservation’s commissioner, and use of state funds intended to finance emission reduction programs for other purposes.  The Gotham Gazette has done a good job of summarizing the situation at the DEC. This is all relevant as these proposals could very well become law one day – as the City is using the Green Codes Task Force report to draft policy, the State’s self-imposed requirement to reduce emissions will most definitely result in code changes for buildings.  Of particular import to GreenHomeNYC’s readership is Chapter 6: Residential, Commercial/ Institutional Mitigation.  The most relevant recommendations are described after the jump. END_OF_DOCUMENT_TOKEN_TO_BE_REPLACED
Tags: benchmarking, Climate Change, Jobs, NY State, Policy, Tax incentives

Curious about what’s in Home Star Energy Retrofit Act of 2010, commonly know as “Cash for Caulkers”? Construction Software Advice has a excellent and thorough run down of everything in the proposed legislation, including details of each of the thirteen retrofit types eligible for funding. END_OF_DOCUMENT_TOKEN_TO_BE_REPLACED
Tags: bill, construction, home renovation, rebates, retrofits, Tax incentives

I am looking to buy a house but before I do I want to make it as green as I possibly can. I want to put in a geothermal system, a cistern to catch rainwater, energy efficient windows, tankless water heater, composting toilets and other environmental saving features. I know there is money for solar by my question is, are there any grants to help me off set the cost of what I want to do?, as I know this will be very expensive. Thank you, Sherba Thanks for your email to GreenHomeNYC’s Ask an Expert! There are a number of incentive programs for improving the energy and environmental performance of your home. Whether and for which programs you may be eligible for depend on the type of home (1-4 family or multifamily building), the measures you’re looking to fund, and on your household income. Some of these programs can be combined. END_OF_DOCUMENT_TOKEN_TO_BE_REPLACED
Tags: Energy Efficiency, grants, Tax incentives

Today I’m looking at this past year’s notable green home related bills from the state legislature – all of which are financial incentive programs that New Yorkers should be aware of.  The legislature reconvenes in ’09, and the possibility of a November transfer of power in the State Senate to Democratic control should be noted (Not as an endorsement of one political party over another, but rather as recognition that the only bills that pass in New York are sponsored by members of each house’s majority party).  A Democratic Legislature and Governor may ease the passage of more green legislation in ’09. END_OF_DOCUMENT_TOKEN_TO_BE_REPLACED
Tags: NY State, Policy, Tax incentives

Hello Everyone! My name is Adam Szlachetka. I’ll be blogging on regulatory and legislative issues that impact green building in New York City, interesting issues related to green home design in the City, and other related topics. Just to get started, there were a few notable items from this summer END_OF_DOCUMENT_TOKEN_TO_BE_REPLACED
Tags: green roof, Policy, solar empowerment zone, Tax incentives